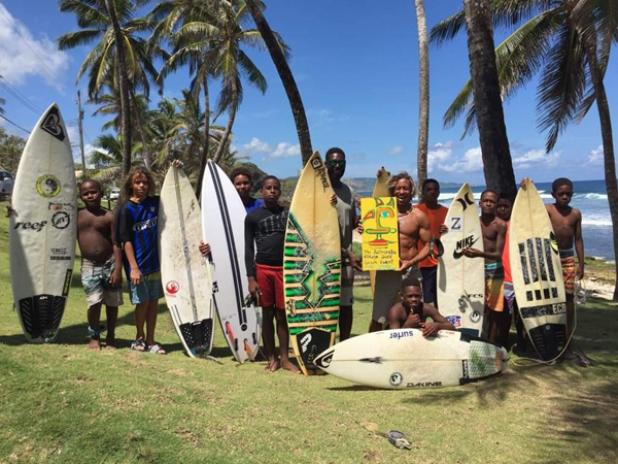 For the second year running, Brian Talma’s Beach Culture World Tour will be lending its star power to Buju’s Bathsheba Village Grom Festival, which comes off today in the St. Joseph village. The two-time Olympian, who has flown the Barbados flag across the globe as he represented the island in various watersports, has given his endorsement to today’s event, which is aimed at rebuilding the community’s surfing population.

Speaking to the Barbados Advocate recently, Talma spoke highly of Kevin ‘Buju’ Nicholls, the man behind the festival, who he calls the last of a dying breed of home-grown surfers from the community. “What he has been doing is he has been teaching kids from the Bathsheba community how to surf and swim. But what I have identified, as I have been doing substantial checks, is a massive problem in Barbados where you are losing a lot of people from communities who can kite-surf, windsurf and surf. He has been doing an amazing job up there. He is a lifeguard and surfer and I have collaborated with him and we are going to do an event,” he said.

Bolstering the event through his Organic Tourism project, which promotes business in the community, Talma noted that the all-day event will involve all interested persons taking part in football, beach cricket, surfing, volleyball stand-up paddle, foiling and what he calls a Beach Culture Carnival, in a bid to foster a new generation of surfers from the community.

With a long-term goal of creating a shop and community centre for surfing, the event has attracted some of the long-stay visitors on the island interested in watersport activities. With the world currently in a delicate situation as it relates to tourism and the movement of persons, Talma revealed that he was making the most of the situation and was giving the ‘action junkies’ more bang for their buck. “The COVID has really affected us and the people that are coming are coming for long-stay. They are not coming for one month, they are coming for two or a longer period of time. And that is why one week after this event, I will do another event at my shop. So on the 8th we will do it in Bathsheba and then a week after we do the organic tourism project again in Silver Sands,” he said.

In addition to the competitions and activities, Talma said that the event would also be used as a platform to pay tribute to other members of the community. Anderson ‘Hoggie’ Mayers, a 1996 national champion, will be honoured on the day for his contributions to the sport over the years. Mayers, who has glaucoma and is almost blind, has had his story taken to an international audience and it has caught the attention of 11-time surfing World Champion Kelly Slater who has made a commitment to pay for his corrective surgery. (MP)