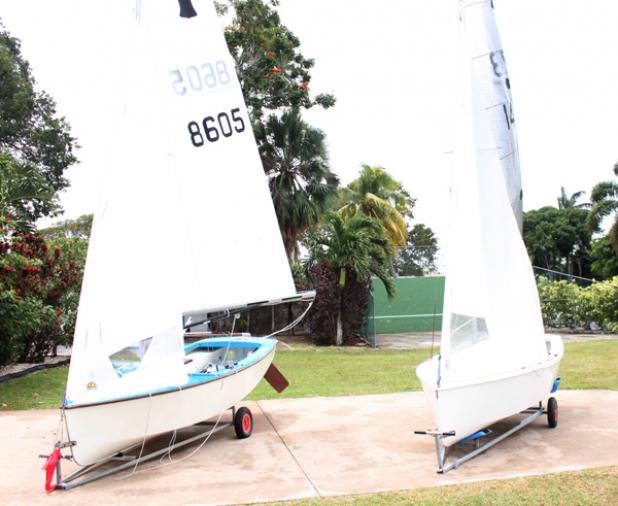 Puffin and College Fund$ 2 are just two of the local vessels registered to hit the water in the 2016 GP14 World Championships.

FROM as early as midday today the waters of Carlisle Bay are expected to come alive as just over 100 teams take up the challenge of the first race of the 2016 GP14 World Championships.

Just about ten local two-man teams will be going up against several overseas pairs from the United Kingdom, Ireland Australia, Sri Lanka, South Africa and the United States of America in the week-long competition.
Marking the fourth international sailing championship held in Barbados, the event has come home in a sense as the Barbadian duo of Jack Hoad and Bill Tempro won the first ever world championship in the class back in 1967 in Ontario, Canada. With 104 vessels registered to hit the water, all teams will be looking to dethrone defending champions Ian Dobson and Andy Tunnicliffe who won the competition back in 2014 in Ireland.
As is customary since the first international competition held in Barbados, locals have taken up the mantle to get familiar with the new vessels and for the GP14 class, nine teams, the largest home-grown contingent yet, are registered for the ten races on the card of the coming week. Jason Tindale and Robert Povey, Colin Symes and Michael Worme, Cyril Lecrenay and Roderick Mascoll, Peter Armstrong and Louise Armstrong, Charlie Gloumeau and Neil Hutchinson, Richard Inniss and Franchero Ellis, Tim Quinton and Ross Parker, Neil Burke and Brian Gibbs, and Joanne Lammens and crew will all be flying the ‘Broken Trident’.
Getting off the ground today, the competition will have races up till next Monday with lay days on Wednesday and Saturday. (MP)