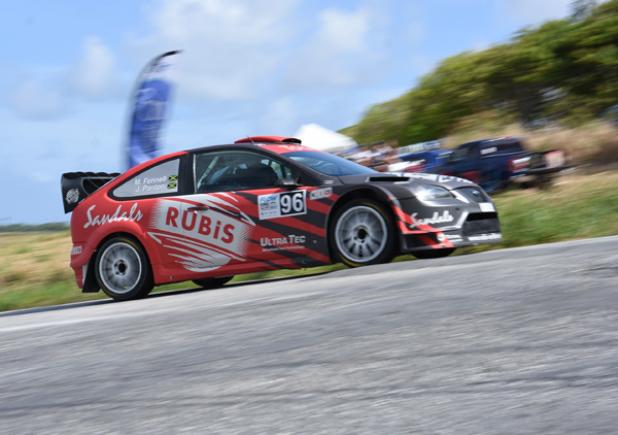 Jamaica’s Jeffrey Panton and Michael Fennell Jr left it for the very last run before they were able to overhaul England’s Rob Swann for victory at Flow King of the Hill yesterday at Stewart’s Hill.

Four in a row for Jamaica’s Jeffrey Panton

Jamaica’s Jeffrey Panton has not driven his Ford Focus rally car for the year, but showed the mind is one of the strongest parts of the body as he saved the best for last to capture his fourth consecutive Flow King of the Hill.

From the onset it was England’s Rob Swann who was leading the way with his Subaru Impreza S12B WRC as he was fastest on the first and second run respectively.

Two seconds separated Swann and Panton after the first two runs, and Panton with a refreshed Ford Focus was visibly pushing and had a narrow escape on his second run, as took the sweeping, uphill left-hand turn after Three Houses.

Swann may have been even faster, but on his third run he had a stall off the start line and decided to abort the run and save the car for the fourth and final run.

Panton, however, had a good run but was still two seconds off Swann’s fastest time.

On the final run many thought it would have been near impossible for Panton to overhaul the margin, but Panton said afterwards he knew exactly where he was losing the time.

It was two high-speed corners which he needed to keep his foot down, but on the previous runs though he knew this he still did not do it and lifted.

However, for the final run he told The Barbados Advocate that they put on some new tyres for better grip and with that confidence he told himself he had to remain committed in those corners and that is what he did to win by 0.12 secs.

Swann was slower than his second run on the final run and this may have cost him the victory in a nail-biting finish.

Still getting used to the change of cars, Barbados’ Dane Skeete was third overall in his Subaru Impreza S12B WRC. Skeete finished just under two seconds behind the winner.

Kevin Procter was fourth in the overall standings, and it was Roger Mayers – giant hunting in his Toyota Starlet – who finished fifth, 0.17 seconds behind Procter in the Ford Fiesta.

Roger Hill was sixth and Rhett Watson was seventh while Barry Mayers was eight.

There were a record 95 entries for the event which returned to Stewart’s Hill for the first time since 2009, but using a slightly different 4.5-kilometre course, starting at St Catherine’s Church.
(CG)