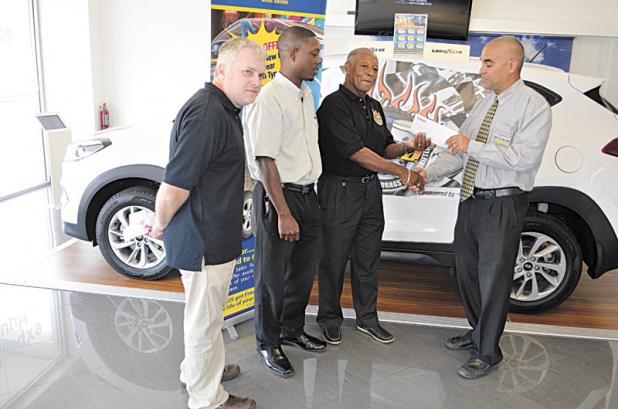 Fri, 06/10/2016 - 12:00am
Four drivers; Mathew ‘DMZ’ Forde, Kevin Griffith, Jeremy Greenidge and Corey Stanford are tied at the top of the standings as drivers prepare for the Barbados Association of Dragsters and Drifters (BADD), Draz Warz 2 at Bushy Park on Sunday starting at 3:00 pm.
And as if to further heighten the quality of competition, seven newcomers are also among the 20 entries at Motorsport Services for the three-hour exercise at the St. Philip facility which he expects to be keenly contested.
Chairman of (BADD), Jason Downey as received the sponsor’s cheque during from GoodYear Tyres, Courtesy Garage and Courtesy Car Rentals, at a press briefing, said the entry list will get longer as they have two more days before entries close.
“Seven new comers are entered, all in turbocharged cars and Sunday’s action will be fast, given the quality of the 20 entries already received and will grow as it appears to be the habit of our drivers, to wait and make a last minute rush to Motorsport Services to hand in their entry forms”, Downey noted.
And in addition to the high-powered entries, the club will be giving fans the opportunity to see and feel what it’s like to be in a racing car, by having a draw in which for four lucky fans will get the chance to come under starters’ orders in a racing car.
“The lucky fans will be suited up and prepared similar to our competitors for a drive with one of the drivers who would be in the competition. We want to get more inter-action with the crowd as this section of the sport has been attracting large crowds”, the chairman added.
He said to, that as drag racing develops BADD is in the process of redeveloping the rules to answer petitions from interested owners of electric cars and their rules has to be amended to cover such vehicles.
“As we go forward we have to keep abreast with changing times and the demands of a new cadre of drivers who are seeking to compete in electric vehicles and this could come to fruition by our event slated for Paragon next month”, Downey noted.
He said that some upgrading is about to take place at the Paragon base, home of the Barbados Defense Force, in time for the event next month and everything looks good for what should be an exciting event.
GoodYear Tyres manager Mark Wilson in his remarks said that Courtesy Garage and Courtesy Car Rentals are happy to be associated with the BADD club for almost it’s inception and he was pleased to see that the tyres such as the GoodYear FI and D-Mack were the tyres chosen by the successful drivers in the club.
“We are motorsport people in this company and being exposed in an intimate way with the sport has given us the opportunity to be in direct contact with individual drivers and assisting them in making the right choices with regards to tyres. It is an up and coming sport and every driver is looking for that extract edge against the competition”, Wilson noted.
And Sunday’s action will not be only for the drivers and GoodYear will be offering prizes to lucky spectators during the day’s action.