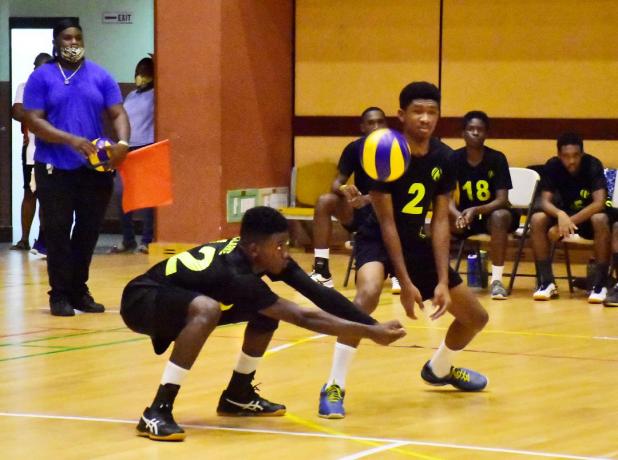 These Foundation players keeping their eyes on the ball as they prepare to attack.

Foundation United bounce back to win

Foundation United men’s team came from two sets down and showed they had the ability to sustain back-to-back marathon games with a victory this time over Progressive in the Senior Knockout Volleyball tournament currently being held at the Garfield Sobers Gymnasium.

On Sunday their game against Cawmere lasted two hours and 23 minutes, On Monday against Progressive the game took two hours and 40 minutes before a winner was decided.

Foundation came away with the victory 3-2 thanks to some impressive hitting from B Callender and the blocks in front court.

The momentum swing during the sets was a huge factor in the length of time. From the first set the intention was set that it was going to be a long match. Progressive taking 35 minutes in the first set 25-23 and then 40 minutes in the second to complete the 30-28 set victory.

However then it all changed as Foundation found themselves in a must-win situation in order to keep their hopes alive of a victory.

The next three sets left Progressive wondering where they went wrong despite some changes from their coach to stem the leakage of points.

In the other men’s match Chargers defeated All Stars in a five-set match which also lasted over two hours, as well as seeing the winner come from two sets down.