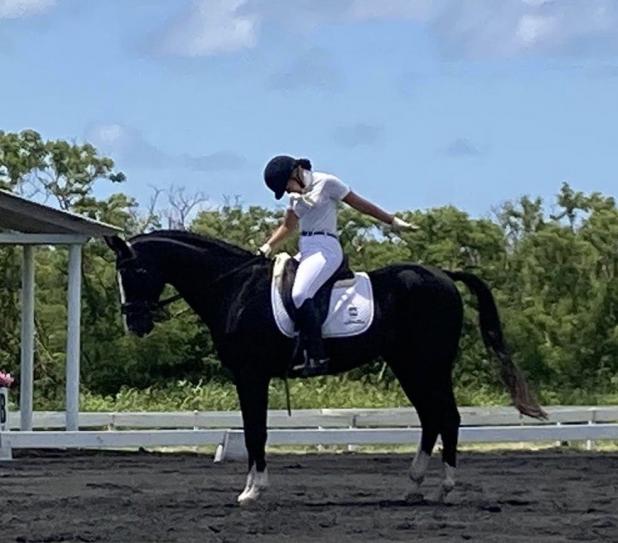 Scarlett Farmer and Man In Black produced the highest score of the day.

Farmer gets off mark in first dressage event

The Congo Road Equestrian Centre was a hive of activity earlier this month when the Barbados Equestrian Association (BEA) hosted its very first dressage competition for 2020. With all COVID protocols in place, the atmosphere was electric and the riders were ecstatic to ride under the watchful eyes of National Judge Alison Elliot.

Fourteen year-old Scarlett Farmer had the highest score of the day in the children’s USDF First Level Test 3 aboard Man In Black with a top score of 75.83%. She came in ahead of 11 year-old Isla Domenge and Rumba who took second with a 64.44%. Farmer returned to take the third-place ribbon with a run of 63.88% on another mount, Lola.

In the USDF Training Level Test 3, Domenge was first and second with scores of 74% and 64% aboard Man In Black and Rumba respectively. Local international equestrian star Roberta Foster took top honorus in the Intermediare II on her mare Chichic with 62.647%. Mackenzie Manning and Ruveyda moved up a test to compete in their first Prix St. George (PSG) with a credible score of 62.941%. Bree-Anne Hurdle and Vivaldi came home first in the USDF Fourth Level Adult Test, while Tammy Pinto clinched the win in the USDF Third Level Adult astride Valentino.

The USDF First Level Adult Test 3 was won by Laura Smith and Little Vegas. This pair is often seen in the show jumping arena and were winners at the second FEI competition Category C 1.10 metre of the World Jumping Challenge 2020 recently.

Monique Archer, who was also a member of the of the CAC Games Eventing Bronze medalist team in Columbia, clinched the top two spots in the USDF Training Level Test 3 Adult class riding Thor and Whizz for 67% and 66% score. Paige Tryhane and Inspiration, a retrained thoroughbred off the track, took third with a score of 64.138% and Lori Brathwaite was fourth on the ever-faithful Royal Diadem (61.379%).

These performances put all riders in great stead as they prepare for the Caribbean Equestrian Association (CEA) Regional Dressage event. (PR/MP)