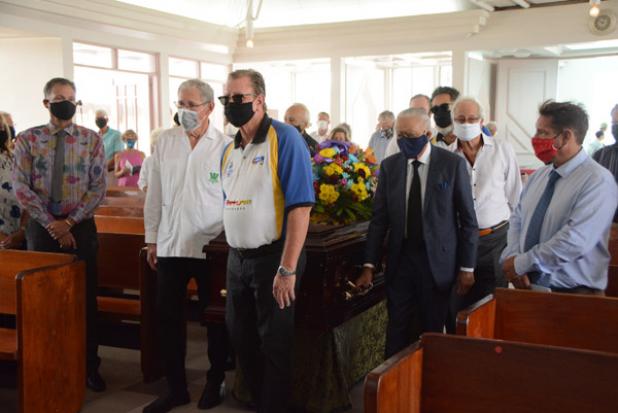 Paul Johnson, brother of Ralph Johnson, leading the casket while Dean Straker (left), Ralph ‘Bizzy’ Williams (second from left) and Stephen Edghill (right) were among those present at the funeral.

YESTERDAY family, friends, and Barbados’ Sporting and Business
community said goodbye to what many described as a legend of Barbados,
Mr. Ralph Lancelot Johnson, GCM, at a funeral service held at Coral
Ridge Memorial Gardens, The Ridge, Christ Church.

Known by the name “Bruggadung”, which one of the tributes mentioned he
got from playing football, Johnson maybe best known for his impressive
work on the water during his time dominating sailing and as the face
of Harris Paints.

Unique and gifted, he left his mark as a competitor and then as an
organiser on many sports and people he met.

He was described as a father figure to many, a hero, a leader, and a
Barbadian legend who played many sports before he settled on sailing.
Some of those sports included boxing, cricket, skiing, shooting,
squash, golf, football and motorsports.

The quintessential man of Sport, Johnson served on the Barbados
Olympic Association’s (BOA) Board for 34 years, 28 of which were as
Vice President. Former longstanding BOA president, Steve Stoute, said
it was difficult to condense all that he did and was into a few words
during his tribute.

In 1997, he was awarded a Gold Crown of Merit for his contribution to
business and sport.

Tributes came from all around the globe and also from former Prime
Ministers who have been touched by his admirable qualities.

Some of the tributes read came from his brother Paul Johnson, which
was read by Nadia Johnson; daughter Tracy; nephew Dean Straker, who
read on behalf of dad Charles Emile Straker from the Merrymen who he
managed; former BOA president Steve Stoute; and son James Johnson.

In motorsport, he was remembered for his thrills and spills in the
Ford Escort, which was dubbed the “Bullet” and it was while competing
at Bushy Park that he was approached about starting a paint company.

He was also one of the persons who started the lottery for sports in
Barbados, which has allowed the BOA to give greater support to the
National federations.

He had the Bruggadung, Bruggadung II and then what was described as a
less aggressive vessel the Rapajam, which was named after Ralph, Paul
and James.

The Barbados Advocate wishes to express our deepest condolences to his
widow Isabel, his children and wider family. (CG)