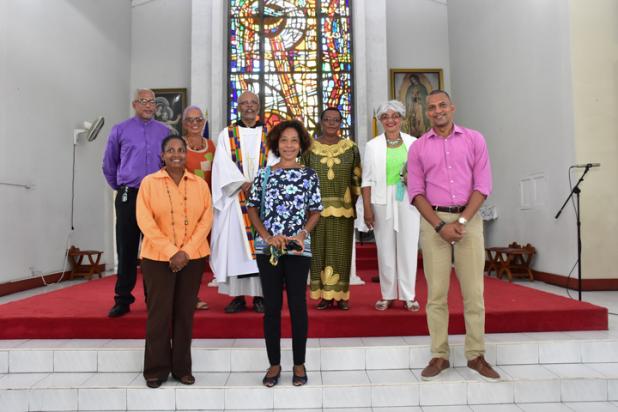 Family came to support Monsignor Vincent Blackett as he celebrated 45 years in priesthood.

The flock at the Our Lady Queen of the Universe, Roman Catholic Church bid farewell to a pillar in the ministry, Monsignor Vincent Blackett, in a mass celebrating his 45 years in the priesthood.

“There are so many things to be done, so many things to do, I do not have enough time. I said the fire is inside of me burning and I am not going to let it be put out. It has to become creative,” explained Blackett.

Monsignor Blackett was a shining light of change as he preached the gospel in Barbados along with missions within the Caribbean region and even across Africa, specifically Zambia and Nigeria. He was also the founder of a congregation of Catholic faith called Friends of Jesus.

Addressing Barbados, Blackett highlighted three things which he believes Barbadians needed to work on, faith, family and friendship. He explained that people needed to develop a life of faith and he stated that COVID-19 had opened his eyes as to the lack of faith in Barbados and people needed to wake up.

The parish priest encouraged Barbadians to begin to build up families and to take stock and cherish friendship, that society needed the strength of both.

Many people paid tribute to Monsignor Blackett, in person and from abroad but the consensus was that the stature of the man was one that would never be forgotten. The well respected priest is known for having a dark skinned Jesus in his church, birthing the Walk Holy band and also his thoughts of writing Beyond The Boundary: Mekkin’ Jesus a Nigga Man.

Co-ordinator of Parish Pastoral Council (PPC) Denise Mongerie-Rogers, said that Monsignor Blackett was a man of education and teaching along with history and culture.

“Monsignor’s ecumenical leadership and development in his various areas of responsibility, have been pioneering, impactful, significant and controversial in many respects,” highlighted Mongerie-Rogers.

The radical parish priest, before his final recessional from the pulpit of Our Lady Queen of the Universe, told the congregation farewell and that he loved them, through a heartfelt solo rendition of Three Times a Lady by the Commodores. (AS)