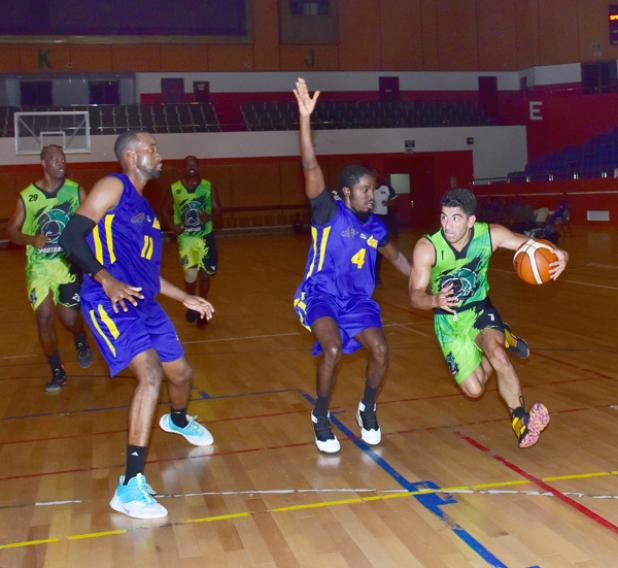 Elihu Diaz of the Church Village Spartans finished with a game high 23 points with 4 steals.

It was an exciting Co-operators General Insurance Premier League feature game between the Church Village Spartans and the Barbados Lumber Company Lakers that went down to the very end and as the Spartans stumbled in the final minutes, the Lakers grabbed the 67-61 victory from the jaws of defeat.

Playing at the Garfield Sobers Sports Complex, the Spartans led the majority of the game but in the final 5 minutes, saw the glory slip from their grasp. The score was locked at 56-56 apiece with 5:03 remaining on the clock but back to back driving layups by Elihu Diaz and Theo Greenidge took the Spartans to a lead of 4, 56-60 with 4 minutes remaining in the game.

Anand Joseph-Thorne of the Lakers made a pull up jumper and to cut the lead by 2, 58-60 before Keefe Birkett sank two free-throws to tie the ballgame at 60. The nerves of having the clock wind down and the Lakers making a late run, turned out to be too much for the newly promoted Spartans. Church Village coughed up the ball 4 times in the last 3 minutes, allowing the Lakers more than enough time to push for the win. The final dagger was a trey from Jimal Singh, placing the score at 65-61 with 34 seconds left, that uprooted the hopes of the opponents. One last turnover by Philip Harewood of Spartans sealed the loss and the Lakers survived the serious scare.

The Lakers had defeated all the lower rated teams faced, lost to the more experienced and talented sides and needed to take down the Spartans to keep some form of confidence to close out the first round of games. Having dispatched the Barbados Hilton Resort Warriors on Tuesday, just two days prior, Lakers looked shaky early and only led the game for just over a minute and a half. It turned out that it was enough for them to secure the game and finish midway in the standings with 3 wins and 3 losses before the final game tomorrow at the Barbados Community College.

Diaz of Spartans topped all scorers in the game with 23 points and 3 steals while Greenidge was good for 13 points along with an 8 point and 12 rebound effort from veteran forward Dale Franklyn. Birkett of the Lakers raked in a double double of 21 points and 10 rebounds while Mark Bridgeman had 9 points and 11 rebounds and Singh went for 11 points.