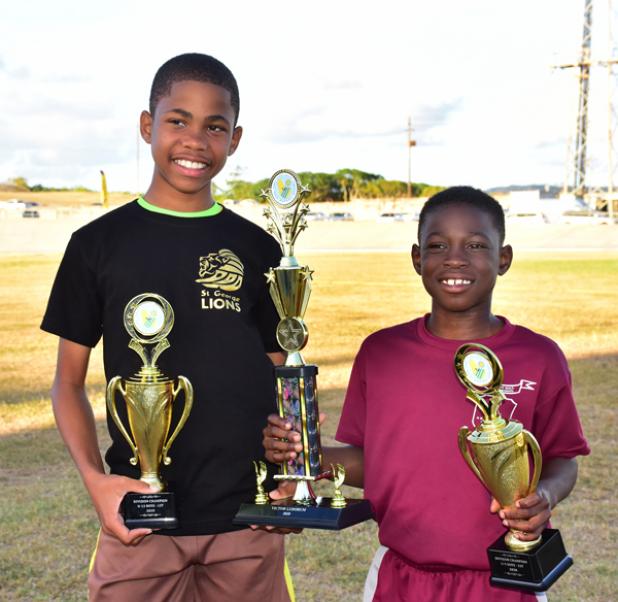 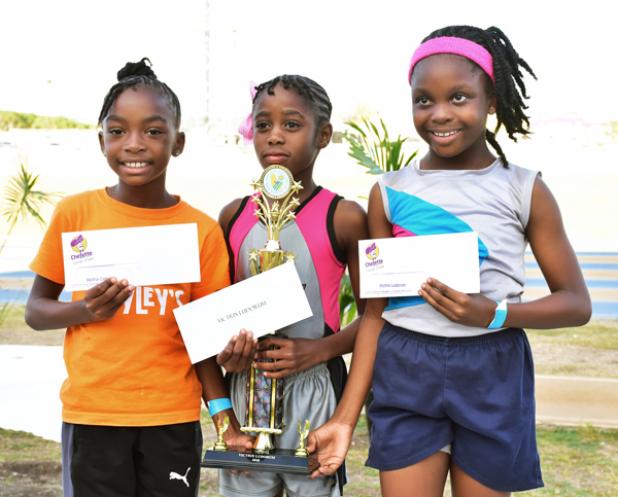 There was a three-way tie of the Victrix Ludorum title. The winners were Taryn Brathwaite (Selah Primary), Rejada Hinds (St. Giles) and Tianna Burke (Bayley’s Primary).

Ethan Hart and Zachary Wall shine on the track

Ethan Hart and Zachary Wall from St. George Primary chased each other all day at the finals of the National Primary Schools’ Athletic Championships (NAPSAC) 2020 and they finished one and two.

When the dust had settled, Hart was the Victor Ludorum and the Division champion with three victories under his belt.

Competing in the Under-13 Boys’ Division, it was Hart who had the edge over his teammate, who he said pushes him to run faster and he has to watch out for whenever he takes to the track.

They started with the 400m and lined up side by side in the middle lanes. Hart took to the front and the back straight and Wall said he was surprised when he saw Hart go to the front so early.

It was Hart once again in the 100m, despite suffering with some pain after the 400m. This may have caused him to miss the record in the event, as he clocked 12.94 seconds and the record stands at 12.50 secs. Second in the race was Wall in 13.34 secs, narrowly edging out Dimani Alleyne from St. Jude’s who clocked 13.36 secs.

A bad start in the 200m for Hart saw him behind Wall at the first 50m of the race, but he said he pushed hard to make back up ground and managed to pull ahead with 75m to go as Wall eased up at the line.

Hart won in 25.16 secs and Wall was second in 25.43 secs with the record still standing at 24.98 secs, which Hart set at the quarter-finals last week.

Also shining for St. George were Javonte Selman and Trekeil Parris in the Under-11, who placed second and third respectively in the 300m. Parris was fourth and Selman sixth in the 100m, which was won by Micaiah Brathwaite from Luther Thorne in 13.11 secs. These two were also in the 200m final and finished fourth and fifth in the race, which was won by Elizer Williams (St. Alban’s) in 27.13 secs and Micaiah Brathwaite was second in 27.87 secs.

There were six records in total that fell on the day and the other records were the Boys’ medley relay as St. George Under-13 won in 1:50.90, and St. Alban’s Under-11 Boys’ relay in 55.79 secs. In the girls, Rejada Hinds from St. Giles broke the Under-9 Long Jump (3.54m), the Under-11 Girls’ 300m was broken by Leanna Green from Wilkie Cumberbatch with a time of 45.78 secs and Aria Weekes from Blackman and Gollop threw the cricket ball for a record distance of 57.51m.