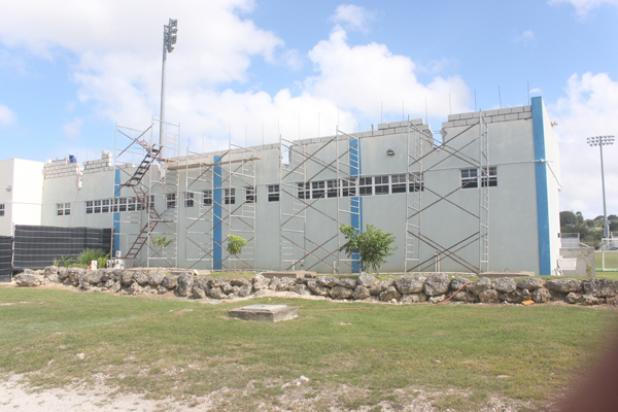 Work has commenced on a second level to the existing administration building at the Wildey Turf.

Earth being turned at Wildey Turf

Although no balls are being kicked at the Wildey headquarters of the Barbados Football Association, the governing body of the sport is keeping busy as the facility is currently undergoing some further development. With the Wildey Turf most recently having work done to facilitate the installation of its lighting and bleacher systems back in 2018, some new improvements are expected to meet members of the football fraternity whenever restrictions are lifted.

When The Barbados Advocate paid a visit yesterday, BFA President Randy Harris explained that another level was being added to the existing structure. Noting that additional offices, a conference room and meeting facilities would be housed in the new areas, Harris added that there was also provision for new referees’ quarters.

“The vision of the Barbados Football Association is for the future and if we want to get serious about our footballers, we have to ensure that our facilities are as good or better than where professional football is being played. The thing is that we want our players to be professional and if that is to be so, we need to give them the tools to play at that level. What we are doing here is to improve the facility at Wildey so that sometime in the future, we will have everything that it would take to produce a player of worth from Barbados,” he said.

Going on to say that a retaining wall for the facility was also being constructed at the eastern end, Harris also stated that a grass field was to be developed beyond that on additional lands held by the BFA. “Our players at the national level sometimes have to play on grass fields and obviously we have to provide the platform for them to be familiar with the differences between that and the artificial turf.”

With plans for a grand stand in the pipeline for sometime, Harris revealed that they should be able to start that project before 2021 is expired. Explaining that tenders were in for the construction bid and all necessary documents ready, he said that the proposal was ready for submission to FIFA.

Work on the current project commenced this past Friday and Harris stated that there was a timeline of 28 weeks set for completion and that it was all in a bid for the improvement of the sport and the country.

“One way to ensure that our football improves is by playing more international friendlies against higher ranked teams. In that way, we are hoping that we can entice teams from Europe and North America to come to Barbados for their pre-season training. Thereby not only helping us to raise our level of the game here, but also helping our country by being here and having the spend to make a difference,” he said. (MP)