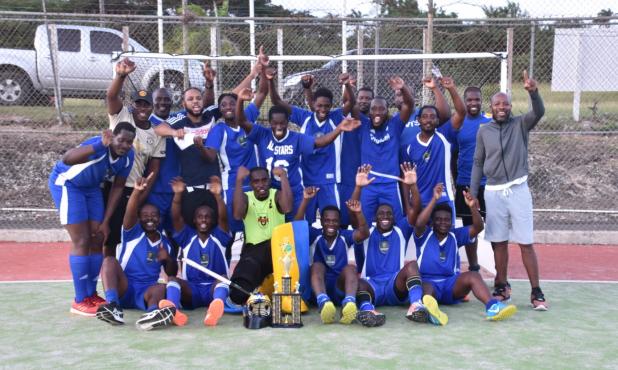 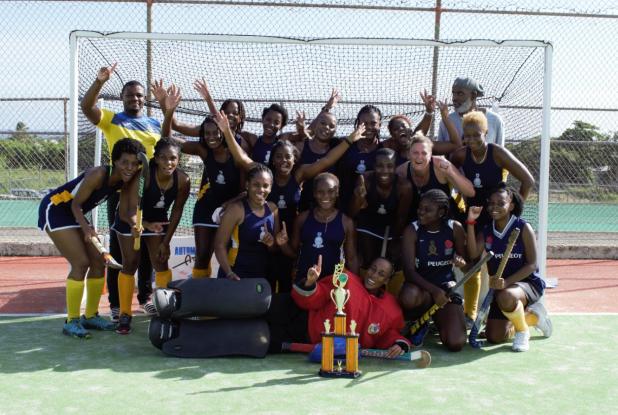 Combermere School Old Scholars (CSOS) and All Stars successfully defended their titles as they lifted the coveted Barbados Hockey Federation (BHF) Knockout Cups in the Women’s and Men’s Divisions respectively.

Playing at the Wildey Hockey Turf, Sir Garfield Sobers Sports Complex, the 2019 winners CSOS netted three goals, while the 2019 losing finalist UWI Blackbirds did not find the back of the nets once.

The UWI Blackbirds, under coach Colin Elcock, looked confident from the touch-off, as the opening exchanges were split evenly and many would have thought it was the Blackbirds with the psychological advantage, as they bested the Waterford ladies in the earlier rounds. But it was the CSOS ladies that commandeered the majority of the possession and frequently attacked the Blackbirds’defence. Their persistence paid off in the 14th, when CSOS’ Reiann Stoute converted her chance, besting Blackbirds’ custodian Neviandra Greenidge and giving CSOS the 1-0 lead heading into the first break.

CSOS extended their lead in the second quarter after forward Tiffany Belle got the last touch on the ball to beat Greenidge again in the 24th from a penalty corner opportunity. Led by captain Ayanna Wilson, the Blackbirds rebounded in the third quarter and created some opportunities of their own, where they earned some penalty corners that were powerfully struck by Nakisha Downes, but none of them found the CSOS goal.

In fourth quarter action, CSOS’ energetic and pacey forward Keisha Boyce, sealed the deal in the 49th after a successful drive ended with her tricky shot slipping past Greenidge, giving CSOS a 3-nil lead with 11 minutes remaining. Though UWI Blackbirds pressed hard, they could not find the goal, with CSOS custodian Dr. Kristina Hinds making some timely saves.

The Men’s Knockout Final was as intense as expected and perhaps even a bit more as late match clashes reflected the passion and intensity of the match. The game tempo was high from the touch-off, and Deacons wasted little time in attacking the All Stars defence with each play. This early sense of urgency paid off in the sixth minute, when Deacons’ midfielder Derwin Burrowes found the goal and bested All Stars custodian Dario Greenidge to give Deacons the early 1-0 lead.

Veteran national forward Venslough Leacock fired a cracker of a shot in the 15th minute, beating Greenidge and extending the Deacons lead to 2-0 at the sound of the first quarter. All Stars tidied up a bit in the second quarter, not conceding any goals, but also not troubling the score either and went into half-time still behind.

That all changed in the second half.

After the restart, All Stars’ national forward Mario Moore secured a brace for his side, finishing the 32nd from a coordinated play and getting the last touch in the 35th from a penalty corner opportunity. With the scores levelled at 2-2, Deacons pulled ahead once again in the 40th, after Leacock got the faintest of deflections while in the All Stars circle, confounding Greenidge to admit the guided edged shot into his goal; 3-2 Deacons.

In the final quarter of the match, All Stars’ frantic search for the equaliser delivered results, as a mass scramble in the Deacons circle ended with All Stars’ Akobi Aymes scoring in the 54th, to the passionate, but futile protests of the Deacons defence. The Deacons appeals were only met by the issuance of personal penalties for their two most passionate protesters, from umpires Shane Lewis and Dwayne Nurse who were not entertaining any inappropriate appeals. Now down to nine men, Deacons were under some pressure from All Stars who wanted to closeout the match and take advantage of their superior numbers. Deacons were able to see out the time however, and send the match into the penalty shoot-out competition.

At this stage of the match, based on the 2020 BHF Knockout rules, All Stars had to overcome Deacons in two successive penalty shoot-out competitions, and do so they did. With successful takes from the likes of Mario Moore and Dario Jordan and good goalkeeping from Dario Greenidge, All Stars won both penalty shoot-out competitions 3-2 and 3-1 to repeat as BHF Men’s Knockout Cup Champions and take the 2020 Cup.