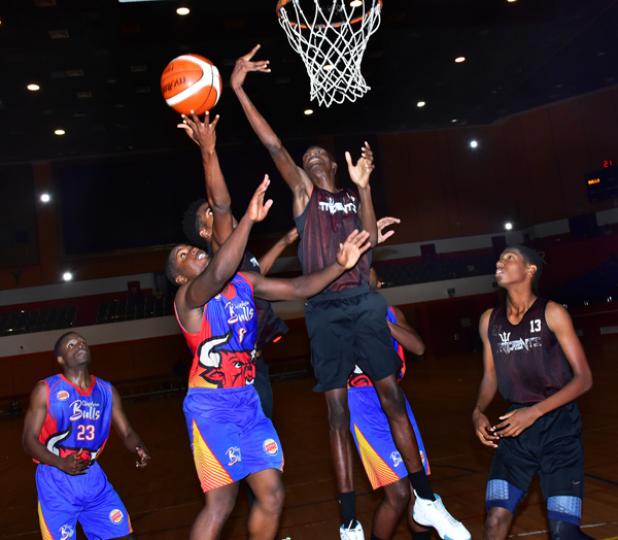 The lanky Adriel Brathwaite attempts to pull in a big rebound.

It was a good fight by the Combined Schools Tridents, but in the end the firepower of the reigning Co-operators General Insurance Premier League champs, the Burger King Clapham Bulls, took care of business.

The 16-point, 86-70 scoreline does not tell the full story, but a win is a win and the Burger King Clapham Bulls remain undefeated with six victories.

The young Combined Schools matched the tenacity of the Bulls early on at the Garfield Sobers Sports Complex – in fact, they hung with the champs for three full quarters, only down 64-59 at the end of the third.

It looked like it could possibly be a fight down to the final whistle, but the competent passing of the Bulls saw points come from multiple players all around the basket.

Romain Lovell, Andrew Ifill, Kelan Philips, Raheem Gibbons and Jae Harris all scored four or more points in the fourth to help Clapham double the youngsters’ output 22-11. Akeem Marsh and Lovell top scored in the game, each with 18 points – with Marsh grabbing 14 rebounds and Lovell 10. Gibbons finished with 15 points and Ifill 13.

Clapham dominated the paint throughout the game, taking apart the defence for 52 points and also converted well in transition with 30 fast break points.

The first quarter and second quarter were almost dead even with the game locked at 19 after the first and 41-40 at the half. Brandon Ruck had a great game for the school- boys with 18 points, 6 rebounds and 4 assists along with three threes in the mix. Simeon Maynard had 13 points, Adriel Brathwaite 12 and Kyrone Alexander 11.

It came down to experience and the Bulls never panicked, taking the charge to the young players in the fourth and making sure there was daylight between the scores when the clock wound down. The defence also locked down on the Tridents top scorer Alexander, giving him only eight shot attempts in the game. (AS)