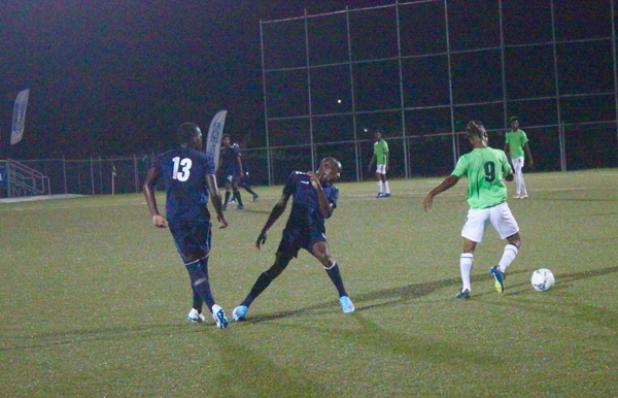 Barbados Soccer Academy could not withstand the power of the mighty Blues and said their goodbyes to the Capelli Cup on Saturday night.

It will be the usual suspects squaring off for a top prize of $50 000 now that the Capelli Sports Super Cup has gotten down to the quarter-finals. After weeks of exciting games at the Wildey Turf, a roster of familiar faces have booked their berths in the playoff of the inaugural tournament.

With the last games of the Championship Round wrapping up this past weekend, several sides from the top tier have secured their spots and a chance at the trophy.

On Saturday night, Empire and Ellerton cemented their holds on their respective groups with substantial wins. Empire sent Barbados Soccer Academy tumbling out of Group 4 with a 3-0 result that saw them unable to surpass second-placed Paradise.

All the goals came in the first half and Zinio Harris had the nets rocking inside the first minute of the game before Jabarry Chandler added a second in the 12th.

BSA has always looked out of sorts since coming up top the Premier League and it continues to show as they have to fight their way through Division 1 this coming season. Harris added to their woes in the 41st to see his team through to the playoffs in fine style.

Saturday’s nightcap was lesson in pain for Youth Milan as they were held to a second loss in Group 2 and hence, booted out of the competition to see Pride of Gall Hill advancing. Ellerton blasted nine goals past their opponents in an ordeal that began in the 10th minute with Shaine Hermas and continued in the 24th, 36th and 37th through the efforts of Romario Drakes, Shakille Belle and Roshon Gittens respectively.

The second half began with Belle scoring twice more in the 46th and 49th to bring up a hat-trick, while Shaquan Clarke (74th), Damien Walcott (79th) and John Ross Benn (81st) brought up the nine goals. Youth Milan were able to get a consolation but it was too little, too late when Kemar Goddard found the nets in the 87th.

On Sunday night, Groups 1 and 3 were set in stone to see Weymouth Wales, the Barbados Defence Force Sports Programme, St. Andrew Lions and the University of the West Indies Blackbirds all going forward.

The soldiers topped Group 3 with a 4-1 win over the Lions after leading 2-0 at the half. Rashad Jules and Renaldo Trim had early goals in the 15th and 17th minutes to see the Sports Programme sitting pretty at the break. However, the Lions came back within striking range when Shamar Edwards beat Kishmar Primus in the 50th. Any hopes of a comeback were short-lived and Raheim Sargeant had the BDF comfortable again in the 51st. It was Jules’ goal for good measure in the 78th that sealed the deal.

Wales waltzed to the top spot Group 1 after the Blackbirds put up very little fight in their 3-0 encounter. Things were kept clean as the Champions Cup winners set up themselves for the quarter-finals with three first-half goals. Ray Snagg put them on the map in the 25th, while Ramar Miller knocked the other two home in the 28th and 33rd minutes.