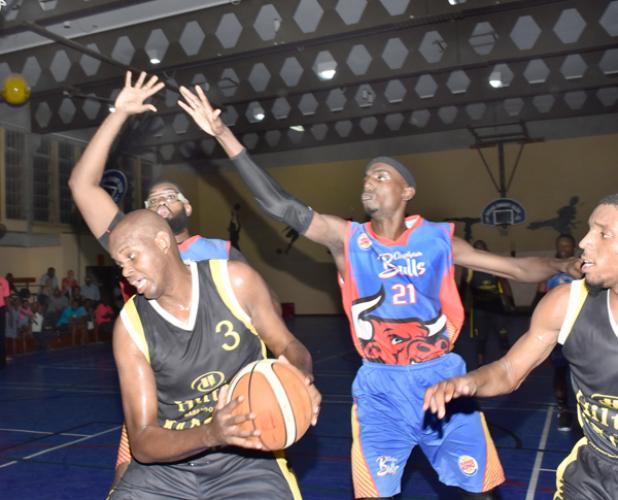 It was a physical battle in the paint, but the Barbados Hilton Resort Warriors out-rebounded the Bulls including 13 grabbed by Nicholai Williams, along with 10 points. 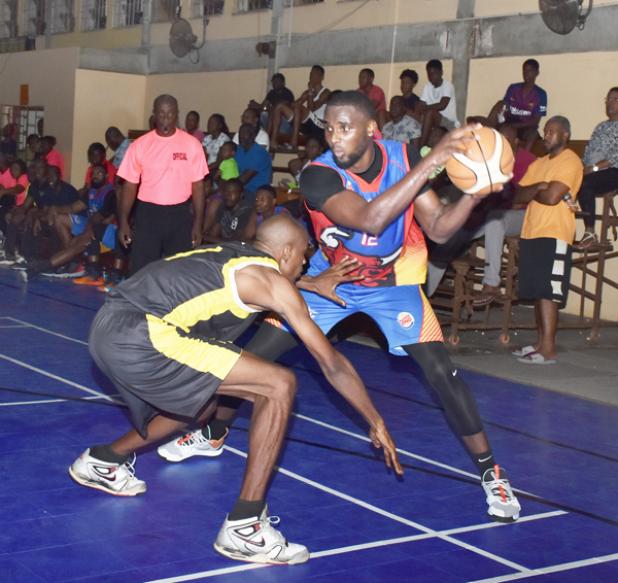 Akeem Marsh of the Burger King Clapham Bulls looks to make his move, but is heavily defended by Warriors player, Ricardo Toussaint.

THE Burger King Clapham Bulls fought tooth and nail to a finals berth appearance next week in the Co-operators General Insurance Barbados Amateur Basketball Association (BABA) Premier League competition while the Lumber Company Lakers were dispatched after their semi-final loss on Thursday night.

Clapham looked shaky many times in the deciding Game 3, 79-72 victory against the Barbados Hilton Resort Warriors. The guards dug them out of the hole each and every time. Defence was the name of the game for the Bulls at the Barbados Community College and with 15 steals converted to 20 points, the strategy paid off. Andrew Ifill had 4 steals, 6 points and 6 assists; Kelan Phillips had 3 steals, 10 points and 5 assists; while Rahiim Gibbons contributed 2 steals, 15 points and 6 assists.

The men in blue and orange also were led by a stellar game by Akeem Marsh, even though the Warriors tried their best to shut down the 6’ 8” centre with double team after double team. Marsh finished with 31 points and 14 rebounds. Marsh kept the points ticking over, battling his way to the ring through the double teams or sinking shots from the outside to avoid them.

Despite all the turnovers and bad ball management, the Warriors fought their way back into the game after each Bulls run. To start the game the Bulls led 17-8 midway through the first quarter, but a quick time-out by Warriors saw them return to the court revived and they hit Clapham with a 7-0 run to cut the lead to 17-15 and then hold on for a close 21-20 end of period score.

The game would remain close with Warriors counter attacking with runs to answer the Bulls. At half-time the score was 39-34 to the Bulls and they maintained the lead at the end of three quarters, 58-54. It really seemed like the Warriors would catch and overtake the Bulls and they had the opportunity late in the game. Four minutes were left on the clock and Shaquan “George” Newton hit a big three to bring the Warriors within 2, 69-67. The slim guard was showing heart on the court and almost single-handedly stole the game from the Bulls. In fact Newton had 8 steals along with a team-high 17 points, including 3 treys in the matchup. The problem was Warriors were turning over the ball when it mattered most and let the game slip from their fingers.

In the end the Bulls will face the inaugural BABA President’s Cup champions, the Station Hill Cavaliers, in the final slated for Tuesday at the Garfield Sobers Sports Complex. The Cavaliers made light work of the defending champions, Lumber Company Lakers, to win 73-56. The game was never close for the Lakers, down 12 after one quarter and 22 at the half. A small run occurred in the third to cut the disadvantage down to 12 points again, but a poor fourth saw them go down and out by 17.

Darren Hunte and Jason Smith finished with 19 and 16 points respectively for the Cavs while Keefe Birkett and Mark Bridgeman both put up 16 points for the Lakers. Station Hill has the opportunity to defeat the favourites – Burger King Clapham Bulls and claim the double title. It will be a tall order as the Bulls were their opponents in the President’s Cup final and will be looking for revenge, however one can never count out the Adrian Craigwell-coached Station Hill. (AS)