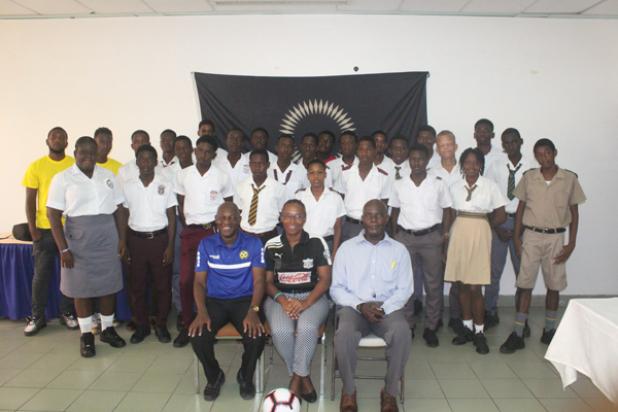 The Barbados Football Association is doing its bit in a bid to ensure that the island does not get left behind as it relates to officiating.

Yesterday, they launched the inaugural Referees Schools’ Development Programme in association with Concacaf, which is set to groom the next generation of referees out of our school system.

With just under 30 students from several institutions with ties to the Barbados Secondary Schools’ Football League taking in the three-day course, the participants came from all skill levels with several national youth players also in the ranks.

Heading straight into the fundamentals of the game after a short opening ceremony, the students were notified of the future that could possibly await them if they considered a career in refereeing.

Commending the youngsters for their interest in the development of local football, Chairman of Referees Committee, Barney Callender, said that it felt good to see the young faces turn out. Noting that he was former FIFA referee, Callender explained that BFA was unable to fulfil the need for young referees and said that this is one of the initiatives put in place to address the shortfall.

“They call us and ask us who we have that is young. They are not asking if you are good or bad, because at that stage, they want to educate them, nurse them and guide them through. So if you take on the responsibility of refereeing, within a year or two years you can be in St. Vincent doing an Under-14 game between Grenada and St. Croix. Opportunities are increasing and they are there for you. What I want you to do is take this course serious.”

He pointed out that during his time, the age that referees had to attain before travelling to officiate was 27. Now that it is down to 18 or 19, Callender said that is exactly why there needs to be more young blood.

“We want to have a situation where we can have young, fit and strong minds out there in the field of play making good decisions as far as football is concerned. Refereeing is critical and there are a lot of benefits that you can derive from refereeing,” he added.

Letting the young men and women know that they are not going to learn everything during this course, he reassured them that there is a solid support system in place to keep them briefed as they went along. Stating that they could be travelling to officiate within a year or two if they did well, Callender encouraged them to stay strong.

“There are great opportunities. Please, I am begging you, stick with this! I want you all to stick with this. It will not be all nice and cool. People will curse you but refereeing builds character. When you become a referee, it looks after your personality. It helps you in your overall development of your personality,” he said.

Referees Manager at the Barbados Football Association, Mark Forde, echoed the sentiments of Callender and said that there is a major need for young referees in Barbados, and that the participants would be getting a chance to strut their stuff within the next few weeks in the NextPlay Cup.

Adding that they would also be expecting to appoint the referees for the Barbados Secondary Schools’ Football League out of this programme, Forde went on to say that everything is already in place to see the young referees through the system.

“When we sent out the correspondence, we asked the schools to send individuals who are interested in becoming referees because I want the people who are involved in this programme to be interested. Once you are, this whole department – the referees committee – we are going to put every effort behind you to ensure that you can make it to the next level.”

Forde, who was one of the island’s most decorated FIFA referees, said that this is their chance to make a difference in the game like he did.

“Like Barney said, if you are not good at playing football, become a referee. I was no good! I had two brothers – Colin ‘Potato’ Forde, who captained Barbados and Ivan ‘Speed’ Forde who played for Barbados as well. They were excellent. Top footballers. I was no good. So I did the next best thing. I became a referee and that took me all around the world and I was able to represent my country like my brothers. You have the opportunity to do it too.” he said.
(MP)