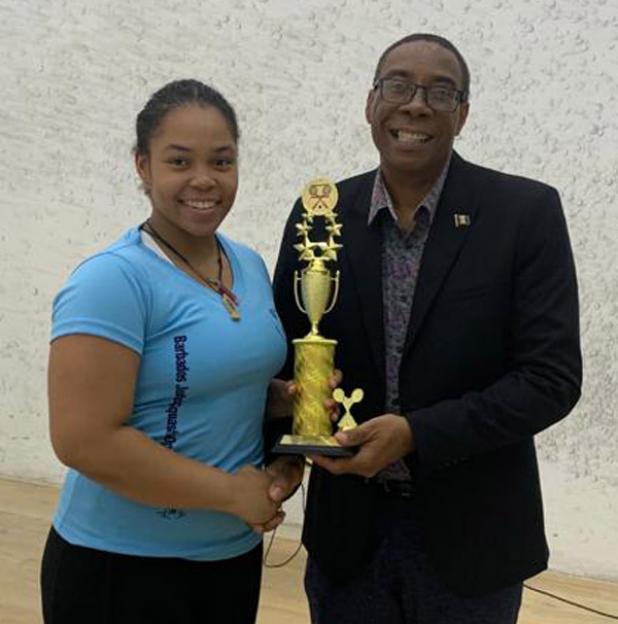 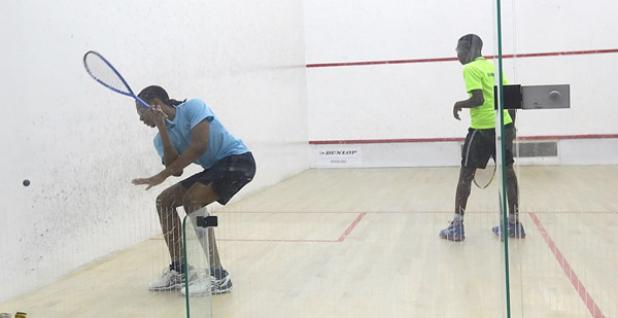 Khamal Cumberbatch plays this backhand shot against Darien Benn on his way to becoming the King of Junior Squash. 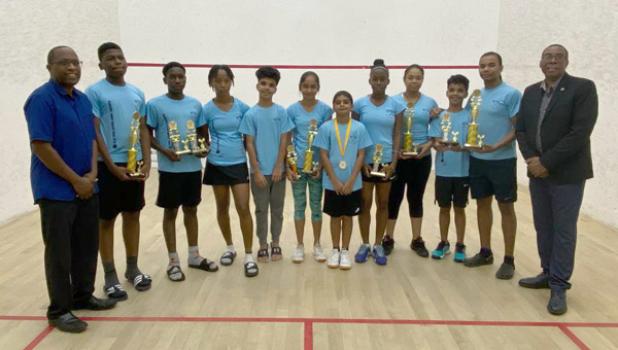 IN straight sets Barbados’ best female squash player, Meagan Best, demolished her opponent to win the 2019 Barbados Junior Squash Open Female Championship title while Khamal Cumberbatch also made a clean sweep in the final to cop the U19 male honors.

Best made it look easy at the Barbados Squash Club facility at Marine Gardens, taking down Jada Smith-Padmore of Barbados in three sets 11-4, 11-1, 11-2. The reigning National Junior and Senior champion played through the tournament without dropping a set and will hold the title for another year. Best said everything went as planned.

“I think it went pretty well, it went according to plan. It was a little more tense than I would have liked because of the previous match, but I think I went on court and did what I had to do and I am proud of how I played.”

Best also stated that she believed she was in a good place regarding preparing for the US Open, but in the weeks to come would be working on fitness and racket work. She also highlighted that Jada Smith-Padmore played well in the final and that all the Juniors are continuing to improve.

Playing in front of a record spectator crowd, Cumberbatch also went to the top without losing a set and had an outstanding game against fellow Barbadian Darien Benn, winning 11-1, 11-3, 11-6. Cumberbatch explained that he felt that his experience, along with Benn playing the U17 final before the U19, worked out in his favor. With the US Open coming up, the champion believed there was work to be done.

“I still have a lot of work to put in but I believe I am on track... Strengthening myself more and working on my shot selection and my IQ.”

Benn went down in the U17 Boys’ final against Hudson Dunn of the USA. Dunn won the first two sets 11-4 and 11-8 before Benn fought back to win the third 11-7. However, the fourth set saw Dunn take back control of the match and dismiss Benn 11-4 to win the title. The U17 Girls’ honors was taken by Sumairaa Suleman of Barbados when she defeated Eboni Atherley of Barbados 11-3, 11-5, 11-3. It was a straight-sets victory for Aidan Parris of Barbados in the U15 Boys’ finals match, winning 11-1, 11-4,11-3 over Dominic Wilson of Barbados. Darci Reich of the British Virgin Islands won the U17 Division, also in straight sets over Barbados player Gabriella Greene, 11-7, 11-6, 11-7.