Cabral Barriteau-Foster being presented with his National Championship belt by boxer and promoter, Gardel ‘Judge’ Roberts. 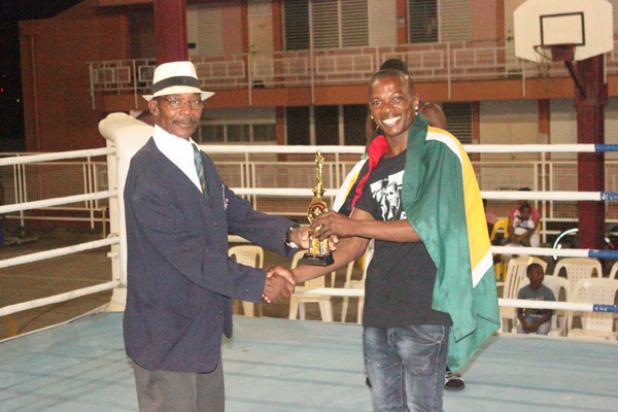 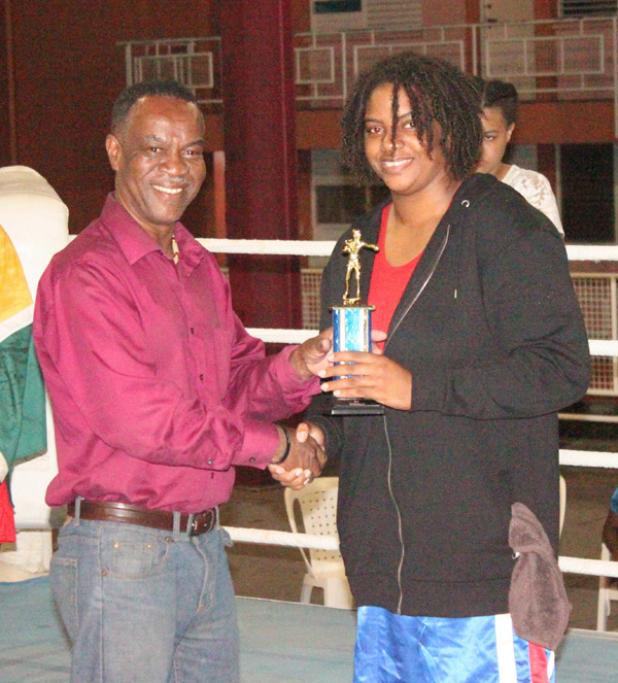 Kemara Stuart won the lone female bout on the night. Here, she is accepting her trophy from Andi Thornhill.

Mon, 10/17/2016 - 12:00am
By:
Michael Phillips
THE island’s hopes in the Senior Males’ Middleweight class at the upcoming Caribbean Development Boxing Championships will rest squarely on the shoulders of Cabral Barriteau-Foster as he came out on top in the feature match of Saturday night’s Carlton Hope/Lionel Hall Tournament.
With the Springer Memorial School providing the backdrop for the Barbados Boxing Association event dubbed ‘Boxing in the City’, Barriteau-Foster out-boxed his opponent Ision Fraser for the National Championship and the spot on the team for the December competition.
With both boxers coming out of the National Gym, the bout was the most-anticipated one of the night. Displaying some of the best stamina in the entire nine-bout card, the two traded punches with Barriteau-Foster favouring the jabs and crosses on his left side. Fraser showed a bit more diversity as he mixed up his combinations with both fists. Despite landing some of the heavier blows, a few of which rocked his opponent’s foundation, Fraser was unable to keep the barrage of lefts out of his face as Barriteau-Foster had more reach and quicker punches.
The Best Boxer title went to Guyana’s Clairmont Gibson, who beat out the Barbados Defence Force Sports Programme’s Ajayi Jones. The two put on an excellent show in the Males’ Youth Bantamweight, a bout that was also the best of the night. The youngsters were almost evenly matched and traded some heavy blows in three three-minute rounds.
All the visiting boxers won their bouts and Guyana’s Jason Barker did so in fine fashion in the only Heavyweight match of the night. His match was completed in under a minute, knocking Four Hill Gym’s Choyo Field to his knees twice shortly after the bell was rung. In a Youth Lightweight bout, St. Lucia’s Nathan Farrier found it easy going against Justin Edwards of National Gym.
In the Novice classes, Thunderbird Gym were held to three losses in back-to-back bouts. Mikhail Cox went down to National Gym’s Peter Murray in the Light Welterweight; Julian Duke was beaten by Deraun-Duval Hunte from the Shaka School in the Welterweight bout; and Kiomel Miller lost to National Gym’s Shaquan Lashley in the Middleweight class.
There were two other Technical Knockouts as Sherwyn Dear of the Thunderbird Gym was unable to continue after only one round against Antonio Rollins of Briar Hall in the Light Heavy-weight class.
The night’s opening bout saw the only female matchup and Kemara Stuart made short work of her Belfield gym-mate Myrkayla Wood, putting an end to the Open Women’s Heavyweight bout in the third round.