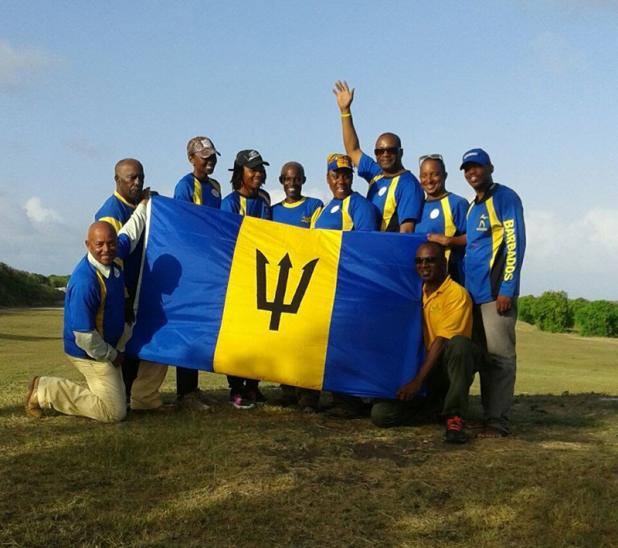 Proud Members of the Barbados Team at the shooting Championships in Antigua.

Wed, 06/08/2016 - 12:00am
The West Indies Full-Bore Shooting Championships was held at the Crabbs Shooting Range in Antigua from May 16 - 22, 2016 and was hosted by The Antigua and Barbuda Shooting Club
The competitions were shot from the 300, 500 and 600 yards range, in the individual and team matches.
The teams that participated were (host) Antigua and Barbuda, Barbados, Canada, Guyana, Jamaica and Trinidad. A total of 53 competitors took part in the annual games.
The Team Members from Barbados were Jason Wood, Manger; Richard Arthur, Assistant Manager/Team Captain; Anthony Wood, Adjutant, Ryan Williams, Javid Benjamin, Monica Ramsay, Shelly-Ann Hinds, Lance Trotman, Louis King and Marlon King.
The first 3 days were for  the individuals which included two classes:  X class (expert) consisting of Marlon King and Shelly-Ann Hinds and O class (ordinary), made up of  Jason Wood, Richard Arthur, Ryan Williams, Javid Benjamin, Monica Ramsay and Lance Trotman.
At the end of the individuals in the X class, Shelly-Ann Hinds total was 461 with 32 v’s putting her in 4th overall in that class and is the top female shooter in the West Indies, Marlon King totaling 451 with 19 v’s putting him in 9th overall in the same class. They were a total of 17 X class shooters.
In the O class having a total of 33 competitors, Louis King finished with 446 with 23 v’s placing him in 3rd, Richard Arthur 4th 445 with 21 v’s, Jason Wood 9th 433/19 v’s, Lance Trotman 12th 428/23 v’s, Javid Benjamin 397/16 v’s, Ryan Williams 381/11 v’s, Monica Ramsay 363/6 v’s.
On Friday, May 20th the Wadadli Cup 4 man team shoot was held. Barbados Team A (Shelly-Ann Hinds, Richard Arthur, Louis King and Marlon King)  came 2nd overall with 391/20 v’s missing 1st place by 12 points. First place was Guyana with 402/21 v’s and third place was Jamaica with 390/17 v’s.
The West Indies Full-Bore Shooting Championships ended on Saturday May 21st with the Anchor Cup challenge where each territory entered an 8 man team. The Barbados team included Jason Wood, Javid Benjamin, Monica Ramsay, Shelly-Ann Hinds, Lance Trotman, Louis King, Marlon King and Richard Arthur. Due to circumstances beyond his control Richard Arthur had to leave after the 500 yards bank, he was replaced by Ryan Williams on the final bank which was the 600 yards. Barbados placed 4th with a score of 1085/52 v’s missing the 3rd spot by 2 point (Antigua 3rd with 1086/ 62 v’s) miss the 2nd place by 11 points (Jamaica 2nd 1096/50 v’s).The winner of Anchor Cup went to Guyana with a score of 1120/ v’s.
The presentations took place at the Sir Vivian Richards Stadium, where Richard, Marlon, Shelly, Louis and Lance were presented medals for the team match and individuals matches. It was announced at the closing ceremony, that the next competition would be in Guyana from 16th through 24th October, 2017.