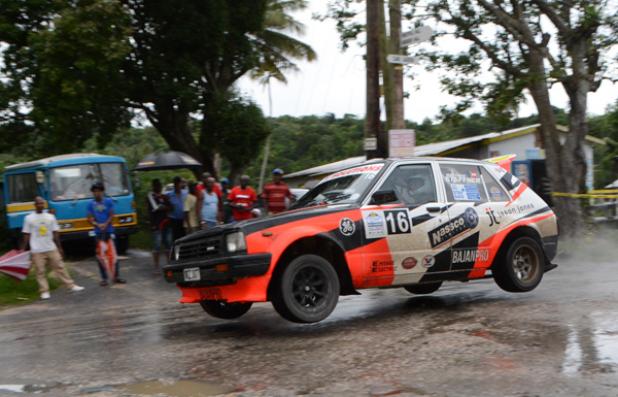 The Barbados Rally Club (BRC) completed a challenging 2020 season earlier this month, with the BRC Winter Rally (December 6) followed a week later by the final round of the Autocross Championship at Bushy Park Barbados. With the Annual Prizegiving scheduled for early in the New Year, competitors, spectators and volunteer officials now have some time to reflect on a season during which the Club overcame the obstacles presented by the coronavirus pandemic to successfully run its championships.

With a 100 per cent record of SuperModified 1 class wins in the Nassco/H Jason Jones/Emtage Electric/Auto Solutions/Valvoline Toyota Starlet, Neil Corbin is the Champion Driver for the second time, adding this year’s title to that won in 2012. After the start of the season was delayed by the suspension of all sporting activities during the island Lockdown, the BRC Driver’s & Class Championships were reduced to six rounds, which ran in a shortened time frame of just over three months between late August and the first weekend of December.

Corbin’s second Champion Driver title also adds a sixth Class Championship to his cv, all achieved in the Starlet, which has been steadily developed over the years; he dominated Modified 6 on his way to the 2012 title, then won the class again twice in the next three years and again in 2016, the first year it was renamed M1. Since a successful move to SM1, and another class crown in 2017, Corbin has had a lean period until this year’s success.

FIA R5 class-winners Roger Hill and Graham Gittens (Esso/MaxMeyer Paints/Motormac/DJ’s Skoda Fabia R5) finished third overall, just one point behind Jones and one ahead of Britain’s Rob Swann. Despite the additional challenges posed by the travel and accommodation protocols resulting from the coronavirus pandemic during 2020, the number of rally cars owned by overseas competitors which are based in the island for a year-round campaign in BRC and other local events continues to grow, and Swann, a regular visitor for the past decade, was the most successful of these this year. Fourth overall in his Blue Sky Luxury/Elegant Hotels/raswann.co.uk Ford Fiesta WRC with co-drivers Darren Garrod and Sean Gill, he won the WRC class and the 4wd Championship, narrowly beating Panton to both titles.

An impressive fifth in the Champion Driver title chase, six points behind Swann was debut class-winner Jason Downey – in his first full season, too - who edged former class champion Stuart Garcia out in Clubman 2, with Kristina Pinto his co-driver the BimmaCup car. Downey was not the only driver to claim a title in his first season, an honour shared with Ahmed Esuf, who won Modified 3 in his Express Imports Inc/Y Esuf Auto Clinic/Prosales/Premier Diamonds BMW M3.

The Chefette MudDogs Safari Championship comprised only three events, but each added a new name to the Club’s Roll of Honour. In the Shelbury Construction ‘June Safari’, delayed until July, Chris King claimed his first victory and Warrick Eastmond his second in their Nissan Frontier, while Willie Hinds and Wayne Manning crewed the Black Bess Group Suzuki Samurai to their first victory in the Chefette Summer Safari. To round off the season, David Armstrong (Nassco Toyota Hilux) joined the list of winners, as his and Andrew Croney’s victory in the November Safari also clinched the 2020 Champion Driver and Navigator titles respectively; Armstrong joins his father Chris, who was Champion Driver in 2012, while Croney adds a third Navigator’s crown to those won in 2018 and 2006, when he won his first overall title from the Novice class. King/Eastmond and Hinds/Manning finished second and third respectively at year-end.

McFarlane’s sixth consecutive Autocross title followed another successful year for the grassroots discipline, with a healthy turn-out of Novices enjoying their first taste of motor sport among the 40 drivers who participated in the five rounds run at Bushy Park; after the season-opener in February, the next scheduled round lost to the coronavirus Lockdown resulted in the sport’s first-ever double-header in August, which tested drivers to the limit with a mix of wet and dry conditions. Driving his familiar Mitsubishi Lancer Evo X FQ, McFarlane went unbeaten all year in the 4wd Race and Street Tyres classes, but there were many hard-fought battles among the 2wd competitors: after tie-break rules were applied, the Race Tyres class was won by three-time class-winner Stephen Nicholls (Nissan March) from Jody Forte (Subaru BRZ), while brothers Jamal and Omar Boodhoo shared their Mitsubishi Colt to battle out the Street Tyres class, Jamal holding off his brother by just two points. Cheryl?Ann Hurley (Toyota Starlet & Hyundai Ioniq) led the Ladies home, while Ramon Moore (Toyota Corolla & Suzuki Swift Sport) was the Novice Champion.