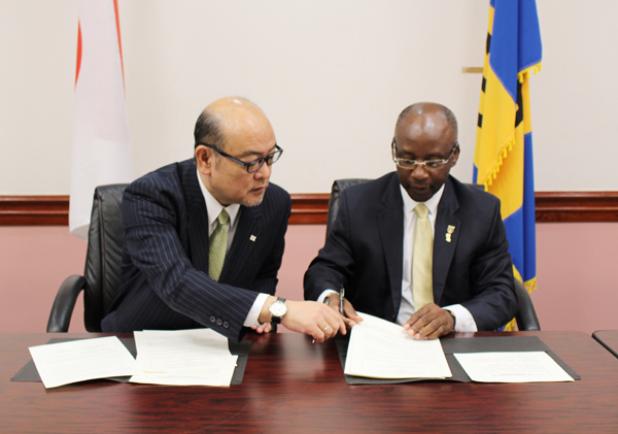 Minister of Culture, Sports and Youth, Stephen Lashley (right); and Ambassador of Japan in Barbados, His Excellency Teruhiko Shinada, signed a Memorandum of Co-operation on Sports yesterday, as they sought to strengthen ties between Barbados and Japan.

“The Agreement being signed this morning will provide a lasting platform for the exchange of experience, skills, techniques and information of mutual interest. We will be encouraging our national sports federations, higher educational institutions and other sports bodies to exchange athletes, coaches and experts; to hold courses, seminars, symposia and conferences; and to develop programmes for collaboration in sports between Japan and Barbados,” Lashley remarked.

“It is envisaged that this will redound to an invaluable exposure for both Barbadians and Japanese stakeholders of sports, and ultimately to an enhancement in the standard of our sports, in keeping with the Government of Barbados’ focus with respect to the development of our youth,” he said of the agreement.

He, meanwhile, noted that his Ministry will be endeavouring to further strengthen relations with Japan in other areas.

“There is also the area of film, in which a key focus can be animation, given Japan’s expertise in the area. It should be noted that will not be new for us, as we will be seeking to build on the collaborative Barbados/Japan event that was held in the Steel Shed a few years ago,” Lashley added.

Ambassador Teruhiko Shinada stressed the weight of the Memorandum, given that Tokyo, Japan’s capital, will host the Olympic and Paralympic Games in 2020.

“As you may know, in November last year, Nanyo City of Japan and the Barbados Olympic Association agreed that this city would play the key role of host city for the Barbadian Olympic team, on the occasion of the 2020 Tokyo Olympic Games,” he pointed out.

He then added that the Memorandum in particular takes aim at more comprehensive goals, as it seeks to promote overall co-operation in the field of sports between Japan and Barbados.

“It encourages the exchange of experience, skills, techniques and information between both countries’ government officials, national sports federations, higher educational institutions and the sporting bodies,” he further stated.

“Moreover, the scope of the Memorandum of Co-operation is in no way limited to elite sports, but also includes sports for children, lifelong sports, sports science, sports medicine as well as physical education,” the Japanese Ambassador commented. (RSM)