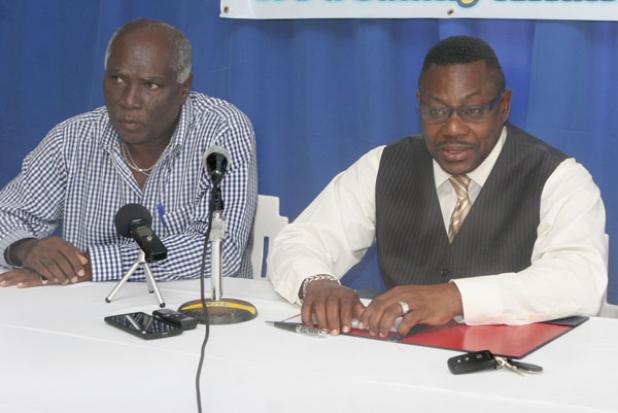 Thu, 03/24/2016 - 12:28am
By:
André Springer
“IT will be the best Senior Games to date.”
So says Steven Blackett, Minister of Social Care, Constituency Empowerment and Community Development, at the launch of the 2016 National Senior Games. The games will be held on May 16, Whit Monday and was deliberately chosen to facilitate the participation of all faiths and denominations of those who have reached the designated age.
Speaking to the media and specially invited guests at the launch at the National Stadium yesterday, Blackett stated that the Senior Games was a national event that not only added value to the local community and family, but also contributed to the tourism product and international recognition through Barbados’ participation in the annual Huntsman Games in Utah, USA. He made it clear that his ministry was solidly committed to the games.
The National Senior games will see an increase in the fun factor and entertainment. This was as a result of calls by the public for a bigger and better full day of entertainment for all ages on the day in the year that Barbados celebrates its 50th Independence. The games will offer a range of disciplines in which persons who have reached the qualifying age (40 years) can participate. These include Archery, Basketball, Netball, Road Tennis, Track & Field, Cycling, Dominoes, Road Tennis, Table Tennis and Lawn Tennis, and the popular 5k Road Race.
Last year, 400 athletes competed at the games and the committee expects that the numbers will increase this year. Coverage of the games will be done by partner, the Caribbean Broadcasting Corporation and the official timing system on hand will be the top-of-the-line system which was used at the National Primary Schools’ Athletics Championships.
A major change this year will be the absence of Zones and instead, athletes will be categorised by age and gender and will represent their parish. Registration forms can be collected from the National Sports Council, the National Assistance Board, the Constituency Department at the Warrens Complex and Sports & Games in Bridgetown.
The deadline for submission of the forms is April 29 and can be submitted to the same venues from which they were received.