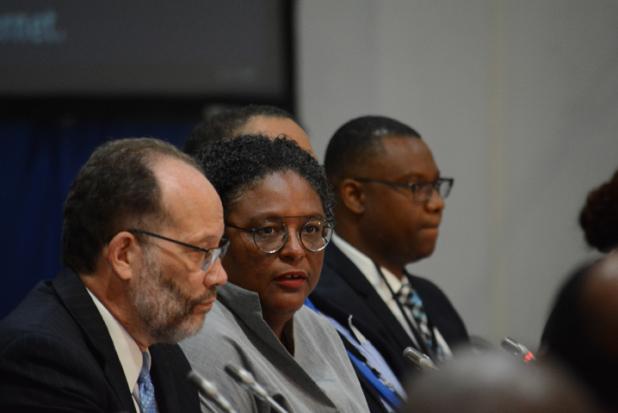 Prime Minister Mia Amor Mottley is adamant that it needs to be less difficult for regional companies seeking to work within other CARICOM countries to do so.

“I refer specifically to the need for us to make life easier for those of our citizens, and by citizens I don’t only mean individuals, but companies who want to move between our countries and who want to do so without having to re-register and pay significant money in each territory in order to do business. It is a matter that we believe can be easily remedied, and it is one that would make that definable difference in a direct way, to those of our citizens doing business in each of our territories,” Mottley told the gathering at the Lloyd Erskine Sandiford Centre.

Her comments came as she spoke to work being done to finalise a Protocol on Government Procurement for CARICOM, hopefully by the end of this year. She made the point while reflecting on the signing of the Protocol on Contingent Rights, which deals with the rights of skilled nationals, their spouses, children and dependants moving to other countries within CARICOM.

“Similarly, those among us in our region who are committed towards expanding their enterprises now have the opportunity to see that they can bid for government contracts over a certain threshold with respect to the Protocol on Government Procurement that we are hoping to put in place by the next Heads of Government for signature. The fact that COFAP [Council for Finance and Planning] has met twice in the last four months, having not met for five years, is also a signal of our intention to be serious about the region’s business,” she maintained.

Prime Minister Mottley noting the importance of getting the CSME functioning, added that CARICOM remains committed to being able to facilitate a single market and single domestic space for transport and single domestic space for communications as well. Drawing on the experience of St. Vincent and the Grenadines, which she said has mastered both areas as it relates to the Grenadines and the mainland, allowing their citizens to communicate and move at an affordable rate and in a reliable way, she is adamant that there is no reason why the wider CARICOM region cannot do the same.

“If it can be done there and if it can be done in Grenada and Carriacou, then it is absolutely essential that we recognise that it is our duty to make it possible between these islands and these countries within CARICOM,” she stated.

Meanwhile, turning her attention to the agenda of yesterday’s meeting, Mottley said she was looking forward to the delegates, which included five other Heads of Government, being able to address some key strategic issues such as the security of our energy supplies and the resilience of our telecommunications.

“Issues pertaining to how best we can assist one another in treating this difficult hurricane period, recognising that only just one year ago, too many of our countries, not just within CARICOM but within the Caribbean, were exposed to the cruellest elements of nature and within a matter of hours their reality became completely different from that which they thought they had before the passage of two of the worst hurricanes in this region’s history,” she stated. (JRT)