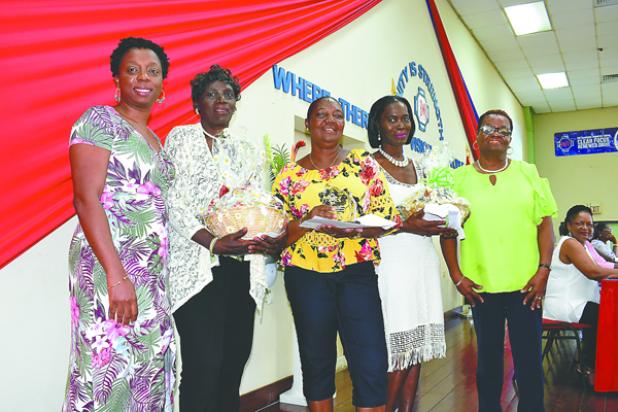 The announcement was made yesterday at Solidarity House during ceremony held at the BWU’s 77th Annual General Conference, where she edged out second runner up Wendy Trim and first runner up Shirlon Jack.

The competition was held between August 7 and August 21, allowing persons in the field to be nominated by their friends, family, employers or peers, with the view of highlighting the persons working in this field who generally stay in the shadows of this informal sector.

Having launched a Domestic Workers Division of the BWU on World Day for Decent Work on October 7 2017, a resolution was tabled and voted on yesterday, calling on government to ratify and implement Convention 189 of the International Labour Organisation to improve the position of the substantial number of women in the labour market who perform domestic work, not only by guaranteeing them decent working conditions, but also by safeguarding their dignity and further urging the government to enact enabling legislation which will give life to the ratification.

General Secretary of the BWU Senator Toni Moore made the point that in addition to domestic workers, office and gas station attendants as well as security guards are some of the other workers that are subjected to poor conditions and mistreated by their employers.

She noted that in the case of security guards, they sometimes have to work 60 hours, the equivalent of a 12 hour shift, in order to be considered for overtime.

“Not that they are the only three but the three the BWU is targeting because we recognise the need to bring decent conditions to these workers. We cannot operate in a society where all jobs coexist so that as a society we can function as a whole, but there is treatment for one set of workers and another treatment that is applied to another set,” she chided.

Moore said she was heartened in 2011 when the Convention was passed, to hear the then Minister of Labour pronounce Barbados was going to be one of the first countries in the region and the world to ratify the Convention on Decent Work for Domestic Workers. Senator Moore lamented that two countries in the Caribbean have already overtaken Barbados.
“All of us would understand that this is one of the categories that still has to be brought of the shadows. When they go to the Labour Department it should be clear for everyone to see that the Employment Rights Act applies to them in the same way that it applies to other workers.”

“This is a category of workers that even if you come from overseas, you shouldn’t have to feel like domestic slave because your passport is being held; because the conditions you are work in are less than human. We are happy we’ve reached this point but we will be even happier where we can say we have not only launched a Division but even where there is no Division of Domestic workers within the BWU we can proudly say we were instrumental in bringing rights, in bringing decency and bringing respect to this category of workers,” Senator Moore said. (JH)