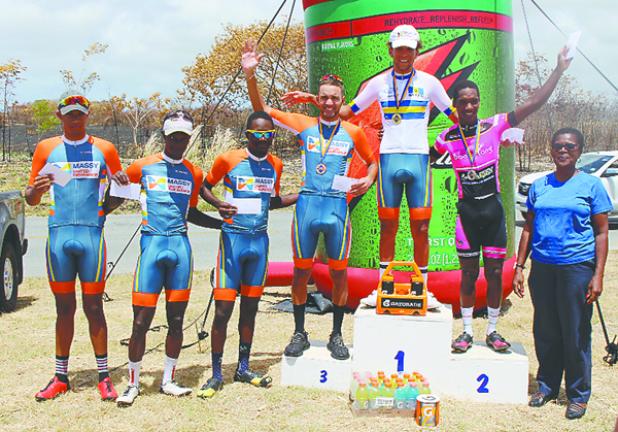 Team Massy United showcased their dominance taking five of the top six places in the National Road Race. The winner, who was presented with the National jersey, was Jacob Kelly, while second was Jamol Eastmond, third was Joshua Kelly and (from left) was sixth place Dominic Howard, Phillip Clarke and Gregory Vanderpool with presenter Mona Alleyne from the National Sports Council.

JACOB KELLY is the 2018 Barbados National Road Race Champion after a perfectly set up race to earn what turned out to be a comfortable victory over the 120km yesterday.

Riding the St. Philip course, which took them over the grueling Stewart’s Hill nine times on the 13.3km loop, Jacob won in three hours 21 minutes 44.090 secs.

Jacob, riding for Massy United Insurance, finished second behind his brother Joshua Kelly the day before in the time trial by less than a second and it was these two, plus Jumbo’s Golden Wheelers Jamol Eastmond, that were off the front of the pack with three laps to go.

It might have been four riders, but an untimely and unfortunately flat tyre stalled Gregory Vanderpool's (Massy United Insurance ) effort. Vanderpool was off the front by a few seconds but, just as Jacob put the hammer down to attack Eastmond during the climb, Vanderpool picked up a flat and was blown past and never caught back up to the leaders.

Eastmond had been up against the formidable team Massy riders for the most of the race, and they tried their best to blow him off the back. In the group were Philip Clarke and Vanderpool, who mounted attacks. Eastmond had one team mate in Edwin Sunderland as they tried to cover the attacks.

When Sunderland gave his last and dropped off it was only Eastmond against the Massy riders. Eastmond looked good going through the climb and with less than two laps to go he fired an attack of his own.

Pulling away from Joshua, the attack was covered by Jacob and these two were about 30 seconds ahead of Joshua as they passed the start/finish line for the bell.

Eastmond hit them while they, Joshua and Jacob, were feeding and Jacob said he panicked at first but then went into his zone and caught back Eastmond when he hit the wind.

However Eastmond started to get a cramp on the final climb and Joshua, who had caught them up before that and paced at the front for most of the lap, signalled to his brother Jacob that it was time to go, which he did to leave Eastmond, who recovered by the top of the climb to battle for second.

“When Jacob made the move I paced majority of the last lap and when I realised Jamol had fallen off I said ‘Right now you have to finish it, I don’t have anything else’ and he saved the legs superb and he finished the job.”

Eastmond, who is better known for his track cycling, easily won the sprint battle to finish second as Joshua finished with a smile on his face in third place.

Vanderpool’s flat saw him settling for fourth place a further five minutes behind, while Clarke was fifth.

Jacob said afterwards that it was an amazing race and thanked everyone for their effort. He said it was an amazing race for Eastmond riding alone on a really hard course as the wind was high.
Joshua Kelly put himself on the line to secure a victory for his team: “From the beginning of the race my team helped out but then everyone started to suffer come lap three and lap four so I said ‘You know what, if someone has to pace I would sacrifice myself because I got the result I wanted yesterday’.”

Joshua added that he “just told Jacob all the time to ‘relax, stay at the back, stay at the back’ and I kept the break away going because someone had to and then in the end our competition just exploded and I gave Jacob everything and told Jacob finish it.”

Joshua mentioned that, “Obviously to get the double is a great achievement but I am still young in my career and today someone had to sacrifice themselves and I feel like I accomplished a big goal in taking up that responsibility.”

In the Masters Over 50 who rode 65km Wayne Edwards completed the double winning by almost 10 minutes from second place Gregory Downie and third place Reginald Jones.

Dominic Howard who finished sixth overall and winner of his category.

In the Juniors Kyle Gill won over the 90km distance, while Category 4 was won by Malavi Velloza and second was Wingrove Thomas.

The Masters 45-49 was won by Junior Proverbs, second was Rene Lashley and third was Miguel Skinner.