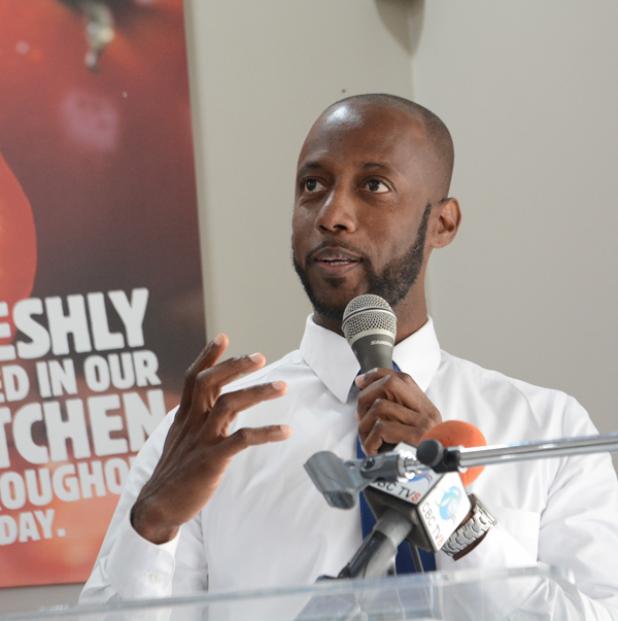 Youth the way forward for DLP and Barbados

GREATER emphasis must be placed on the youth, not only at the national level, but also at the level of the Democratic Labour Party (DLP) as it seeks to rebuild its base.

Business executive Ryan Walters, who has set his sights on St. Michael North West seat for the next election, made the observation over the weekend at the DLP’s Pickled Politics & Souse discussion, where he stated that youth affairs are matters that he intends to place at the forefront of his agenda.

“Even without hard evidence, I believe we have a sense that much of the youth has left the DLP, and like myself, the DLP too must again place the youth back at the forefront of the party’s agenda.

“The party has a massive task ahead if it is to regain its place in government, and doing this requires that we recapture the trust and aspirations of the public, and youth in particular, to chart a prosperous, fair and sustainable way forward for the party and the country as a whole.”

In fact, Walters suggests that as a party and a country, it would be delusional to think that charting a path to these goals can be done without genuine, long-
standing participation and the prioritisation of the youth in all that is done.

“The DLP and the country need a youthful and agile approach to how it thinks and operates. Barbados’ development can’t continue to be held back by the same age-old approaches and problems that have been ongoing for a generation.

“We live in an era where we must be agile, innovative, technologically savvy, aware of the new and emerging opportunities and have a modern approach to governing our society, and who better to bring these characteristics than the youth.”

Walters said the DLP must make a clear distinction from the DLP as it relates to where it stands on youth affairs gave some insight into what the future plans should encompass.

“We must speak about the plans the party has to grow this economy that it could properly facilitate the youth. The plans to diversify the economy that can properly facilitate new and emerging skills, whether in alternative energy, digitisation, software development, the arts, stocks and investment, videography and entertainment, sports science, environmental protection, social media management and communications, business and entrepreneurship, science and innovation, whatever area there are we must facilitate them. These are the areas that get young people excited, areas where they can showcase their skills and talents and diversify and grow this economy."

He cautioned however that the youth cannot propel the country if they are held back by the same problems.

“We can’t grow and diversify this economy and better facilitate young people without putting some thought into the culture and the way we do things. As a party we must be forward thinking and explore policies such as flexi-time, the 24 hour economy, facilitating young people to work and contribute from their personal spaces, support digital communication, a 21st century approach to education. We must rethink the cost of being connected for young people, open access policies for wifi, how do we facilitate unlimited data plans and unshackle young people from unnecessary limitations.

“Although all of these matters the party should take on, the DLP is the party of the people and we must recognise the people are different. That is why we must go to people where they are and include them in all that we do. Some young people way want to create their own niches in animal farming, husbandry, hospitality and cuisine, tourism, marketing. These individuals too must be allowed to make a living and prosper doing so.”

He challenged that for years persons have been talking a “big game” about facilitating the youth, none moreso than the current government.

“But ask young people today how they feel about their current circumstances and it becomes evident that much more needs to be done, and the DLP could get this done.

“We’ve been getting plenty lip service and ill-conceived policies from this administration, but when you investigate the substance the youth are no better off. The government has been bringing on individuals that I have to question what is the real value that they can bring to drive a prosperous, fair and sustainable future,” he challenged.