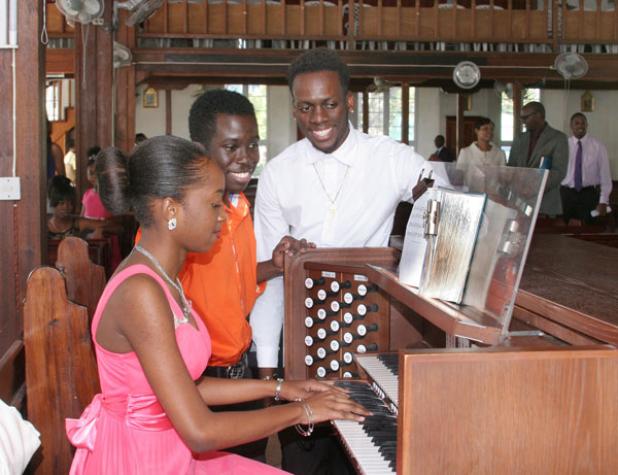 Meagan Foster shows her skills on the organ while organists Ricardo Watson (centre) and Demario Roach (right) look on.

Tue, 01/31/2017 - 12:00am
By:
Janelle Husbands
AT A time when many churches are moving towards a more modern approach to music to attract a younger membership, something interesting is happening in one of the Anglican churches in the north of the island.
The hauntingly beautiful sounds of the classical pipe organ can be heard coming from the St. Philip the Less Church in Boscobel St. Peter, but the person, rather persons, behind the organ on any given Sunday might come as a surprise.
Ricardo Watson, a 23-year old final year student in the Barbados Community College (BCC) Fine Arts programme is the musical maestro who has taken over the spot of  20-year old Demario Roach, who will shortly be moving on to play at another Anglican Church. Watching them closely is 17-year old business student of the St. Michael School, Meagan Foster.
Three young persons share the same love for music and playing an instrument which for many is the only true music to accompany a choir, while others believe it should be placed in a museum.
Speaking to The Barbados Advocate recently, Ricardo recalled that his interest in music began at the tender age of four when he took to the piano shortly after his father died.
He played at church harvests, anniversaries and even played at a funeral while in third form with the permission of the principal of his alma mater, Coleridge and Parry. He also became the leader of the school’s jazz band at an early age. He attributes his early training to Julian Bowen, an organist at the St. Peter’s Parish Church and Kirk Layne who toured with Arturo Tappin. He mused, “So I have the classical and jazz.”
Ironically, although Ricardo’s masterful playing in many ways belie his age, he is not a member of the Anglican Church but a member of Alpha & Omega Pentecostal, where he is the musical director. His Sundays are very full since he goes there after his 8.30 am service at St. Philip-the-Less is finished.
“I always wanted to play the organ but never got the push. Ryan Boyce who was the previous organist here, who is at St. Thomas now, hired me for events on the hotel circuit, weddings. So he pushed me to do this. This is a good thing. Sadly it is dying in Barbados. There is a need for young organists because so many churches are lacking them.”
The multitalented young man who also plays the saxophone, drums and the bass guitar is currently seeking to be officially certified in the organ. He has hopes to incorporate some elements of jazz into the music of the church. “The congregation here, they are open to it. I’m not too sure about other churches, but it is a work in progress,” he smiled.
His friend, Demario started at the Ignatius Byer Primary as a bongo drummer. He progressed into playing the drum set and went on to the then St. James Secondary playing the saxophone. He recalled that the pop band needed a keyboardist and he filled that position. “Then I was going to church, Reverend Davidson Bowen saw me playing the keyboard and asked me if I wanted to play organ and I told him yes.”
He received a scholarship of sorts and has been playing the organ for approximately two years. He noted however that moving on to a new church is bittersweet. “I’m happy, nervous, sad. I have been here for a while now, but you have to move on to develop your skills.”
While he can already play the keyboard, drum set, saxophone and organ, he is hoping to get into the BCC programme to complete his Associate Degree in Music. “I love Jazz. I’m not a classical player but I’m willing to learn.”
While others have helped them along the way, they too are paying it forward and helping young Meagan, who started playing the piano at 4-years old but is also drawn to the organ. They revealed that a jazz concert is being planned for next month where the talents of musicians of the church will be on full
display.