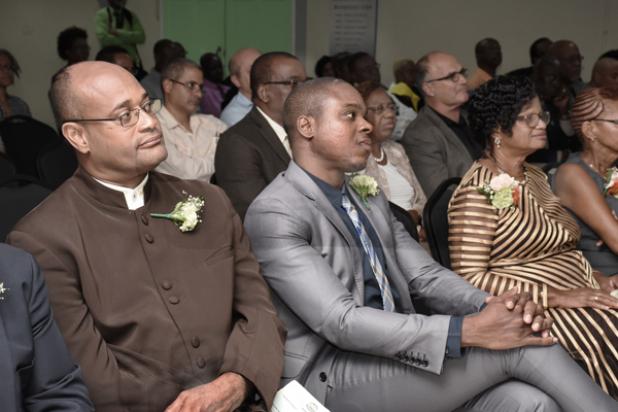 President of the NUPW, Akanni McDowall (centre), sits with Senator the Hon. Patrick Todd, Minister of State in the Prime Minister’s Office and Roslyn Smith, General Secretary of the National Union of Public Workers, during Thursday night’s opening.

President of the NUPW, Akanni McDowall, has maintained through his presidency with the assistance of the General Secretary and the executive that there have been significant achievements made for its members.

The President was speaking at the 73rd annual General Conference of the National Union of Public at the Union (NUPW) headquarters and on the heels of the union election.

On this occasion, he highlighted the various areas where the executive is able to report positive gains. McDowall stated, “In order for the Union to remain credible and fight on behalf of members, it must ensure that it adheres to its own systems of checks and balance. It is perhaps one of the achievements of my Presidency and service with my Executive of which I am most proud. I am happy to report that for the first time since 2013, this Union is in a position to table fully audited financial statements to account for members’ investment in the union.

“We can only ask for transparency from our partners after having ensured that we ourselves hold up accountability as a hallmark of all our endeavours.

“This Executive has also worked hard to ensure that the money which you spend on dues has value added for you. We have introduced a discount card for members... .We have made accessibility to the Union and its activities easier with our new website, launched this month.

“One of the major assets and income generators for our Union is the real estate at the Garrison, St. Michael. In order to ensure its upkeep, we oversaw needed renovations to the Union plant. We also installed a new security system to protect workers, files, records and property.”

The President pointed out, “Your Executive negotiated a salary increase for workers at the Grantley Adams International Airport. The Executive oversaw the commitment of the appointment of all workers in posts with more than three years of acting.

Perhaps the most publicised work of the Union over the last year, to protect workers and ensure that their terms of service are properly negotiated and agreed to, is the case involving the Customs Officers of Barbados. The National Union of Public Workers has been successful in ensuring that Customs Officers were not integrated into the Barbados Revenue Authority in a manner which was detrimental to them.

“The Union knows that there is need for reform in the Customs Department. However, the Union remains unconvinced that housing the Customs Department under the Barbados Revenue Authority is the most seamless arrangement. The Union has always been, and continues to be open to discussions and negotiations about how best to streamline and improve our various public service functions. What we will never be open to is outright bully tactics and disrespect for the process of consensus building and partnership.

“Until the Customs Officers of Barbados can be guaranteed tenure and the various issues and other concerns are ironed out, the Union will stand hand in hand with its primary stakeholders – the worker – in articulating and agitating for answers to their concerns.”

He continued, “A less publicised case of worker empowerment in which the Union engaged this year was the case of job mobility for orderlies employed at the Queen Elizabeth Hospital. The Union facilitated negotiations which resulted in orderlies who already had a basic sense of emergency medicine, being able to train to become emergency medical technicians, thereby creating increased pay opportunities and job mobility for them.”

According to him, “The conditions in which many of our public servants go about their service is still woefully inadequate in too many instances. Ensuring comfortable working conditions for members and public servants again took up a lion’s share of the time of the Executive, general secretary and administrative staff.

“We have been able to negotiate a new home for immigration officers. The facility is to become available by June 2017. Workers at the old VAT office also benefitted from improved working conditions. The restroom facilities at the Sanitation Service Authority were renovated. Staff of the Government Information Service and the Statistical Departments were relocated due to complaints of poor working conditions. Within the Queen Elizabeth Hospital, we were able to secure better working conditions for staff in the sewing room, the medical records department, kitchen and junior doctors. We were able to agitate and secure better working conditions for staff at the Sir Winston Scott Polyclinic, The Psychiatric Hospital and the Nutrition Unit.

“The National Union of Public Workers not only agitates for better working conditions, but also for better national conditions for health service provision in Barbados…” (NB)