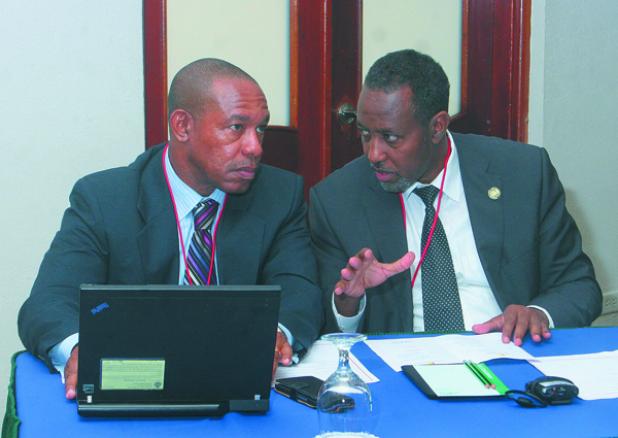 There is a suggestion that the postal services in the region should engage in greater collaboration, to ensure that they can make significant contributions at the international level.

It has come from Attorney General and Minister of Home Affairs, Adriel Brathwaite. He was speaking at the opening ceremony of the recently held 3rd Council of Ministers of Postal Affairs Conference, which was held at the Accra Beach Hotel and Spa on Friday morning, as he addressed fellow Caribbean ministers responsible for the postal services and staff of the postal services.

Brathwaite made the point while noting not only the disadvantages posed by the size of the delegations from countries in the region attending meetings of the Universal Postal Union (UPU), but also the high cost associated with attending such meetings.

“I am told it is becoming more and more problematic for us as a region, because in some instances, there are 120 different meetings going on during that time, and it is impossible for our small delegations to make meaningful interventions at the various sessions.

“In speaking to the postmaster on this issue, it is clear to me that we have to approach it from a regional perspective, because individually we are going to find it more and more challenging to go off to far-flung places.  From what I am told, we are seeing less and less intervention from us in the region, in particular because of the cost,” he stated.

To that end, the Home Affairs Minister said the relevant authorities in the region must get together and determine how they will address that challenge collectively, including how the costs associated with such travel can be shared.

Turning his attention to the upcoming UPU Congress scheduled to take place in Turkey from September 20 to October 7, he said there is concern about whether it will happen as planned, in the wake of the terror attacks there. While noting that he was saddened by the attacks, which killed 44 people, the Attorney General said wherever the Congress takes places, it is imperative that the region’s voice is heard.

“We have several issues that we need to address and reach some consensus on, and more importantly, whatever decisions that we make, we have to ensure that they are in the best interest of us as a region.

“One of the complaints that I’ve heard, or observations made, is that in fact, in some quarters, to maintain the status quo has been easier, because in particular, for small developing nations like ours, there has been some concern about whether or not we should have an equal voice... whether your voice should be equated to the revenue you generate or contribute,” he noted.

Brathwaite maintained the region is definitely not in favour of that viewpoint, seeing the countries in the Caribbean as equal to all nations in spite of their size. (JRT)