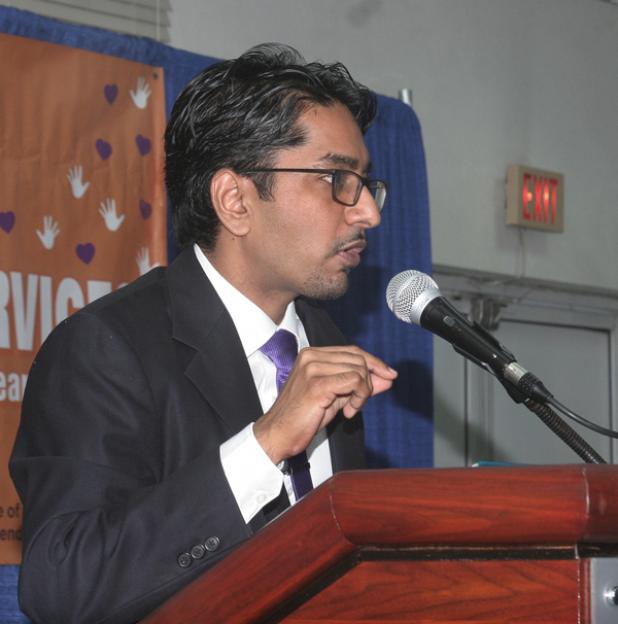 A section of the large audience at the Lloyd Erskine Sandiford Centre gathered for the 21st Century Oncology/Cancer Support Services – Women’s Health Seminar.

Women at risk for cancers

Sun, 09/11/2016 - 12:00am
ALL women are at risk for gynaecological cancers.
That risk usually increases with age, says Consultant Obstetrician, Gynaecologist and Gynae-Oncologist, Dr. Vikash Chatrani.
He shared this with the 21st Century Oncology/Cancer Support Services – Women’s Health Seminar, pointing out that there are five areas “below the belt” that can undergo cancerous change – vulva, vagina, cervix, uterus, and ovaries.
“When you do your pap smear, you are looking at the cervix. Yes, your gynaecologist will examine the external genitalia and the vagina, but it is not addressing all five areas and that is a misconception that people have – that they had their pap smear and everything is good.”
He informed the large gathering at the Lloyd Erskine Sandiford Centre (LESC) that cancer is on the rise.
According to the World Health Organisation (WHO) report 2014, cancer is the leading cause of death of non-communicable diseases.
“Why is that? Because health care has improved. But does that make sense? It does, because of improvements in health care people are living longer, they are no longer dying of things that used to kill them in the past. Diabetes is no longer an illness that would kill you in your 50’s or 60’s. Hypertension, what they would call the ‘silent killer’, you go to your doctor, you get treatment, so you end up living longer. The longer you live, the more likelihood of you developing cancer… So I am not saying the treatment for cancer or the cure for cancer is an early death, but there are certain things that you do to prevent cancers. So cancer is on the rise.”
Speaking on the topic, “Womb: Uterine Endometrial Cancer – #1 GYN Cancer”, Dr. Chatrani said that there are two main types of cancer of the uterus or the womb – Endometrial Carcinomas and Uterine Sarcomas. He indicated that Endometrial Cancer is the most commonly diagnosed gynaecological cancer, explaining that the cancer starts in the lining of the womb; this lining is called the endometrium. Whereas with Uterine Sarcomas, these cancers develop from cells in the muscle layer of the womb, rather than the lining.
“It used to be cervical cancer… data from Globocan 2008 showed that cervical cancer was the number one ‘below the belt’ cancer – the number one gynaecological cancer. But there have been good improvements in cervical cancer screening. Your pap smear picks up pre-cancer and cancer that allows for treatment at an early stage. What we have found is that uterine cancer has now surpassed cervical cancer… It is not to forget that breast cancer is that number one women’s cancer; it surpasses them all,” he observed.
Abnormal vaginal bleeding is the most common symptom of womb cancer.
Dr. Chatrani therefore told the gathering that if they have been through menopause, any vaginal bleeding is considered abnormal.
“…When you go through menopause, your menstrual cycle (period) stops; it does not come back. Once it stops, that bleeding or what you called a ‘period’ that comes back is abnormal and you should visit your doctor for that, because it could be that the lining of the womb is now starting to grow again.” (TL)