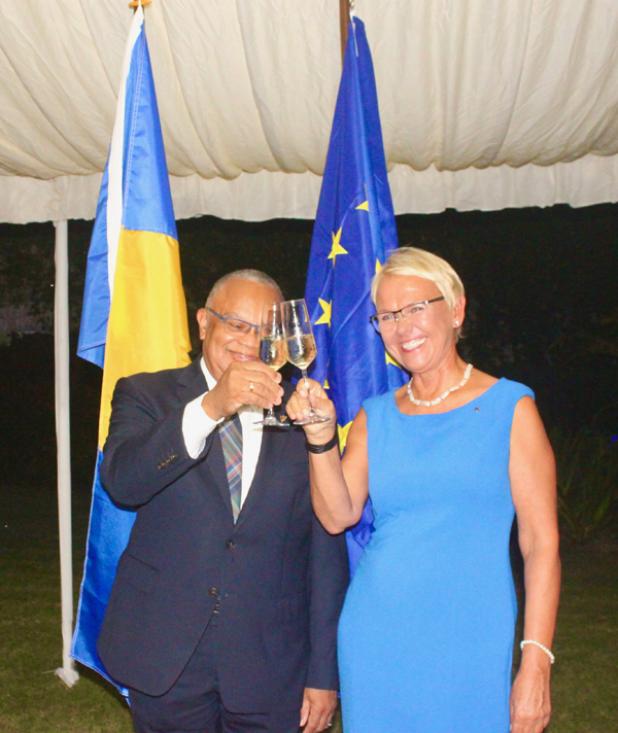 European Union Ambassador Malgorzata Wasilewska (right) and Minister of Foreign Affairs, Senator Dr. Jerome Walcott, as they made a toast to cap off Tuesday’s reception.

A stellar Barbadian sunset provided the backdrop as members of the Diplomatic Corps and government officials gave a warm welcome on Tuesday evening to new European Union Ambassador Her Excellency Malgorzata Wasilewska.

The woman who will now be heading up the Delegation of the European Union to Barbados, the Eastern Caribbean States, OECS and CARICOM/CARIFORUM was toasted during a cocktail reception at the Barbados Museum.

With Barbados and the EU boasting 44 years of relations and partnership, Wasilewska, who hails from Poland, is the 12th ambassador and only the second woman to hold the post, replacing previous ambassador Daniela Tramacere. She is no stranger to the region after being previously stationed in Jamaica where she also presided over Belize, Turks and Caicos Islands, Bahamas and the Cayman Islands.

The evening saw several other ambassadors such as Japan’s Teruhiko Shinada and Linda S Taglialatela of the United States, as well as Minister of Foreign Affairs Senator Dr. Jerome Walcott in attendance.

Noting that she was looking forward to working with their CARICOM and CARIFORUM partners in the areas of regional integration, crime and security, among other things, she noted that climate action was also very high on the list.

“We have observed a record number of tropical disturbances this year, proving even to the greatest cynic that climate change is real, I am happy that the Caribbean has been largely spared. I am even happier to note that through our support to the Caribbean Risk Insurance Facility, we were already prepared for potential impacts. Similarly, as COVID-19 continues to wreak havoc on our health, economic and education systems, we have been quietly working in the background to ensure countries throughout the region will have access to a vaccine whenever it becomes available, which we trust will be soon,” she said.

Noting that the EU had 27 member states, Wasilewska explained that the United Kingdom’s departure did not spell certain doom for the Caribbean region.

“Let me make it clear that the departure of the UK will not leave the Caribbean exposed; the European Union will continue to be a strong partner to the region and we will continue working with our UK colleagues in a coordinated manner to the best assistance to the people of the region. I trust we will continue to be strategic in our collective vision as we build an even more resilient region in areas such as climate action through our Green Deal, digitalisation, sustainable growth, jobs, migration, governance, peace and security,” she said. (MP)