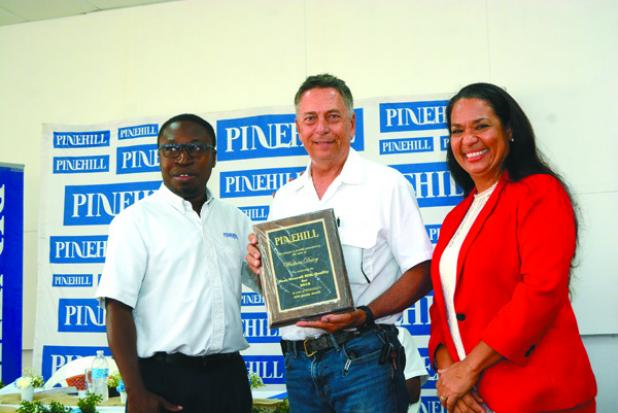 In its effort to drive the dairy industry forward, Pine Hill revived its ‘Best Overall Milk Quality Initiative’ in 2015, rewarding those farmers producing milk of an exemplary quality.
Owner of Walkers, Paul Davis was presented the award in the presence of several of his peers at the Pine Hill Dairy headquarters during the second annual ceremony yesterday. He extended thanks on behalf of himself and his employees, pointing out that they are constantly engaged in testing their product to ensure that it is the best quality being put forward.
Davis also expressed his desire to see milk production in the island return to higher levels, noting that in 1998 the local industry produced 6.2 million litres of milk, the most ever recorded on the island.

“Hopefully, we will get back to that level,” he stressed, adding that there are several challenges currently affecting output including climate change, drought, low forage levels and the high cost of importing feed.

He therefore called for a resident research nutritionist for the sector to especially look into forage feed to help reduce the need for overseas feed, pointing out that the island had lost the only such professional to Guyana years ago.

In response, Inter-American Institute for Co-operation on Agriculture representative Dr. Ena Harvey, who delivered the feature address during the ceremony gave the assurance that she would try her best to see how the organisation could meet that request.

Earlier in the event, Davis also collected his company’s award for the 2016 Fourth Quarter win and for the Highest Fat Percentage.

Most Improved Farm was awarded to Rockless Enterprises, while both Ashford Dairies and St. Catherine’s Dairy Farm tied for having the Highest Average Total Solid Percentage. (JMB)