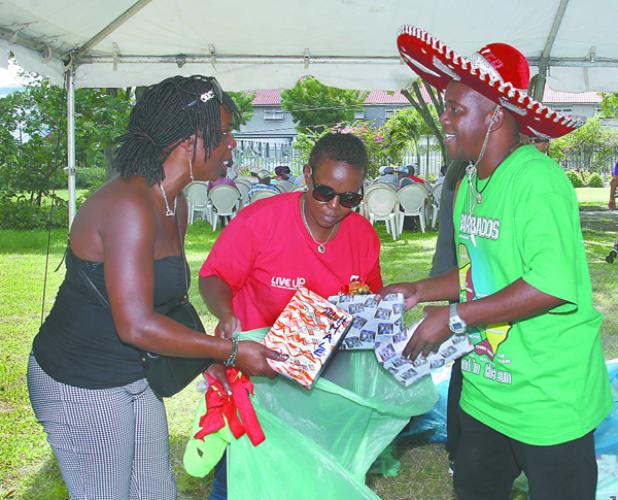 Terry “Mexican” Arthur (right) of the Love Day Project with volunteers Susette Neblett-Straughn (centre) and Jennifer Jackman as they prepare gifts to take to various communities across the island.

Sun, 12/11/2016 - 12:23am
By:
Janelle Husbands
BARBADIANS from all walks of life made their way to Queen’s Park yesterday to participate in the seventh annual Love Day event, bringing smiles to those less fortunate across the island.
The collaborative effort of the Barbados Vagrants and Homeless Society and the Love Day Project saw several volunteers, including local entertainers as well as members of the business community, giving a hand wherever they were needed.
Creator of the Love Day Project, Terry “Mexican” Arthur told the Barbados Advocate that the two organisations join forces and provide food, clothing, haircuts, health checks, counselling to those in need. At the same time, the Love Day group, which also met in Queen’s Park yesterday morning, went around Barbados, bearing gifts, hampers and played music in the communities spreading Yuletide cheer.
He also stressed the importance of the human touch, noting that at times a hug is appreciated more than a gift. The group later also went to the Geriatric Hospital where they played for the elderly patients.
“It is one day of love in a simple and effective way. It will keep growing as long as we keep getting the support,” Arthur said.
Chairman and President of the BVHS Kemar Saffrey thanked persons for their support noting that people are generally more charitable at this time of the year. He noted that the more they give and the more people who come forward to volunteer, the more people can be reached.
“Every year we want to get bigger. That is what the Love Day Project is all about. We touch thousands in this project and we believe we are doing a wonderful thing,” he said. (JH)