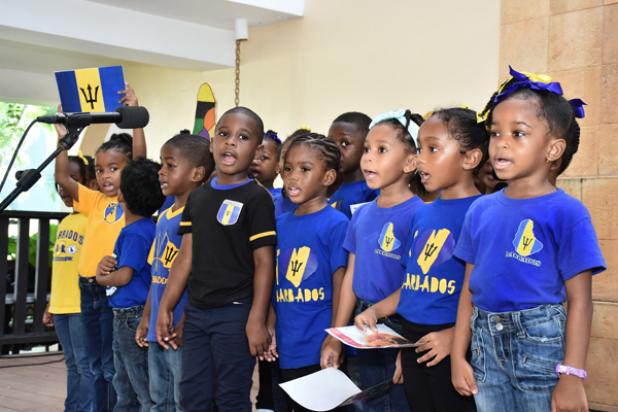 KG4 students of The Rock Christian School sang passionately as they serenaded guests at the Turtle Beach Hotel, blessing them with Bajan folk songs in celebration of Barbados' 53rd year of independence.

The guests at Turtle Beach Hotel received a special treat recently during breakfast, as the students of KG 4, Rock Christian Primary School serenaded them with popular Barbadian folk songs.

Juann Merritt, KG 4 teacher at the Rock Christian Primary School told The Barbados Advocate that when they realised that Independence was approaching, she thought it would be a special treat to perform for the guests and give them a little taste of their culture.

“We thought, ‘what can we do to let guests know that we still care about our culture and to educate the children in the process?’ and so we decided to do a small performance. We know at this small age it is the best time to teach them all about Barbados,” she said.

“The practice was fairly easy because the children were so excited to rehearse. And this morning they were at school since 7:30am and they were all excited to perform.

“The reason why I started this in Social Studies is because if you look at the Independence activities now, most of them are domino matches and the like, but we need to let our children know what was happening in the past; I even showed them the jucking board, which was used instead of the washing machines. As you know these children were raised in the time of the washing machines, so they really did not know what a jucking board was.”

She believed that it was important to teach the children about the history of their country.

“It is important, you have to start at this young age, you can’t wait until they get older because it’s not going to register,” she said.

“So all of these are things we try to instill in them, this is what Barbados was like before, yes we have become independent, but we don’t want to forget what it was like.”

One guest was particularly thrilled by the young students’ performance that she approached them after the performance to let them know that they truly made her trip more special. She also encouraged them to work hard and keep up the good work in the future.