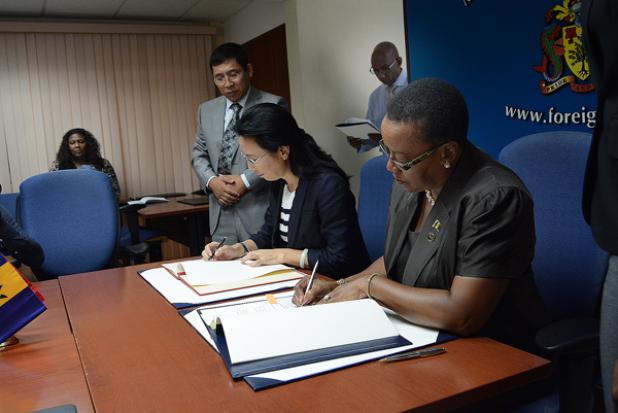 Ambassador of the People’s Republic of China to Barbados, Wang Ke, and Minister of Foreign Affairs and Foreign Trade, Senator Maxine McClean (right) signing the documents that would lead to visa free travel between Barbados and China.

Travel between Barbados and China will soon become much easier as the two countries signed off on a reciprocal Visa Waiver Agreement that would include holders of ordinary passports.

Minister of Foreign Affairs and Foreign Trade, Senator Maxine McClean, and Ambassador of the People’s Republic of China to Barbados, Wang Ke, placed their signatures on the documents that would start the process that at its conclusion would see holders of Barbados’ and China’s passports being able to travel between the two countries without requiring a visa.

Barbados would be the third country in the region and the tenth worldwide to reach such an agreement with China, according to Ambassador Wang, who outlined the potential that would be created, especially regarding tourism.

Last year, 137 million Chinese tourists spent $109.8 billion worldwide, she told those gathered at the Foreign Affairs Ministry’s headquarters, adding that China is becoming an important target market of long-distance and high-end tourism, and its people would be drawn to the shores of Barbados.

However, Wang noted that due to the distance, inconvenient transportation and lack of professional communication and marketing, “Chinese tourists could not come in numbers to the island overnight”.
She therefore called for steps to be taken to explore opportunities of collaboration between the two tourism authorities, urging the BTMI to work on strategies to attract Chinese tourists.

“Second, we need to further set up policy framework to facilitate two way tourism, especially continue to work towards the signing of Civil Aviation Agreement to clear the way for future direct or charter flights. Third, we need to explore client-tailored tourism products and service to meet the preference of the Chinese visitors, such as cruise tour, double-destination tourism, namely extend the tour of the Chinese tourists who travel in Europe and North America to Barbados, golf tour and Crop Over tour et cetera,” she outlined.

In her remarks, Mcclean noted that the agreement would assist in government’s diversifying its tourism market, and contribute to strengthening to tourism sector and the economy.

“It will of course now be easier for Barbadians, who are known to enjoy visiting other countries, to travel to China for business or as tourists. This will serve to expand the opportunities for cooperation and friendships beyond the official contacts,” she added. (JMB)