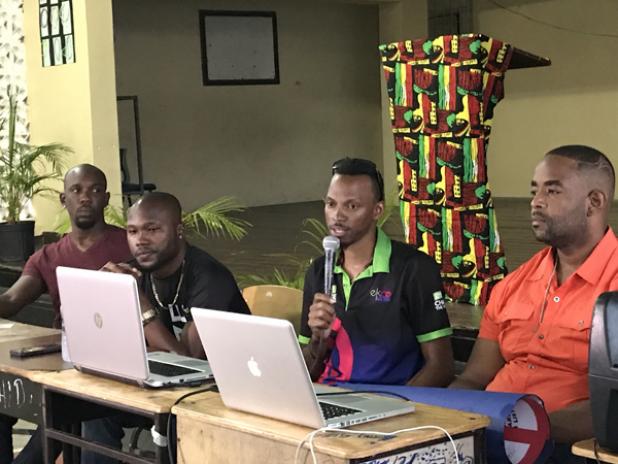 From left: Kashi Browne, DJ Timeless, and Randy Eastmond (right), teacher at the Parkinson Memorial School as they listened to Arnold ‘Gozzy’ Goslin as he made his presentation.

Violent music should be banned from radio

EcKo Nation is continuing to lobby for violent music to be cancelled off of the public airwaves of radio.

This comment was made by Arnold ‘Gozzy’ Goslin, co-creator of EcKo Nation, as he spoke with parents during a panel discussion, which took place at the Parkinson Memorial School Thursday evening.

“One of the things we continue to lobby for as a movement is to have all violent music removed from off our public airwaves because we believe that that music is influencing the youth. The young people may still be able to access the music via the internet but from a public standpoint, I think we need to monitor what we put on the airwaves.”

Gozzy noted that music was a powerful tool for teens as studies have shown that it had the power to shape their emotions, their perspective of the world, themselves and their peers.

He noted that the violent kind of music and the songs that promoted indecent exposure of the young women of society was glamourised as almost 90 per cent of all the major hip hop or rap music promoted such.

“Music does not make anyone do anything, however, it is an influence and it shapes their minds,” he said.

“Music is one of the few things that could impact every single part of the brain.”

Meanwhile, DJ Timeless added that every single thing was now accessible via the internet and children will be able to access the music whether or not it was banned in the house. For this reason, he believed it was important to instill values in the youth so that they would be able to make better choices when choosing which songs to which they would want to be exposed.