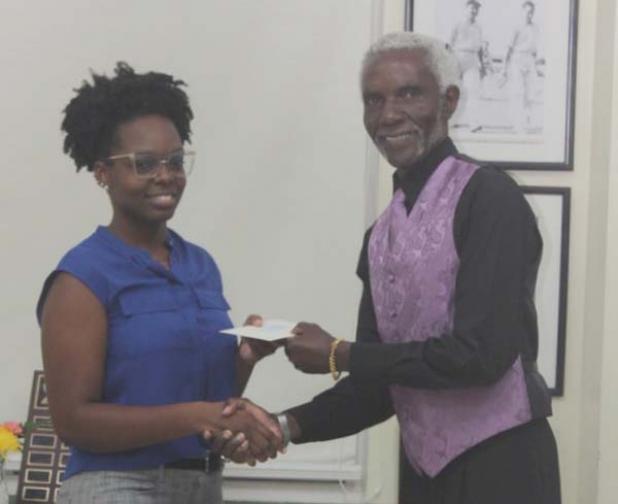 Dean of the Faculty of Humanities and Education at The University of the West Indies (UWI) Cave Hill Campus, Professor Frederick Ochieng’-Odhiambo, presenting the Faculty prize to Brittany Gibbons.

Dean of the Faculty of Humanities and Education at The University of the West Indies (UWI) Cave Hill Campus, Professor Frederick Ochieng’-Odhiambo, and other faculty members standing with the night’s prize winners.

Valuable options in Humanities and Education

ONE university Dean has argued that disciplines in the area of Humanities and Education should not be overlooked.

In fact, Dean of the Faculty of Humanities and Education at The University of the West Indies (UWI) Cave Hill Campus, Professor Frederick Ochieng’-Odhiambo, has suggested that these subjects are just as valuable as STEM subjects.

His comments came while speaking at Tuesday’s Faculty of Humanities and Education annual Prize-Giving Ceremony. This was held at 3Ws Pavilion, The UWI, Cave Hill Campus.

“In recent times, emphasis, perhaps too much of it, has been laid on the so-called STEM subjects, that is, on science, technology, engineering and mathematics. And this has led to the perception that subjects or disciplines taught within our Faculty are not valuable or that they are of lesser value. Nothing could be further from the truth. In all sincerity and fairness, subjects studied in our Faculty are just as valuable if not of greater value.”

Professor Ochieng’-Odhiambo further argued that “for STEM subjects to be meaningful and valuable, disciplines within the Humanities must tinker with them. Disciplines within our Faculty give a human face to STEM”.

He also outlined that “disciplines within Humanities and Education matter and they ground one to: (1) understand others through their languages, histories and cultures; (2) they foster social justice and equality; (3) they assist people [to] make moral, spiritual and intellectual sense of the world; (4) they teach us to deal critically and logically with subjective, complex, imperfect information; (5) they teach us to weigh evidence sceptically and consider more than one side of every question; (6) they build skills in writing and critical reading; [and] (7) they encourage and teach us to reason about being human and to ask questions about our world”.

During Tuesday’s ceremony, several prizes were presented to outstanding students who have excelled in their disciplines in History, Linguistics, French, Spanish, Literatures in English, Philosophy, Education, Psychology and Theology at Levels I to III.