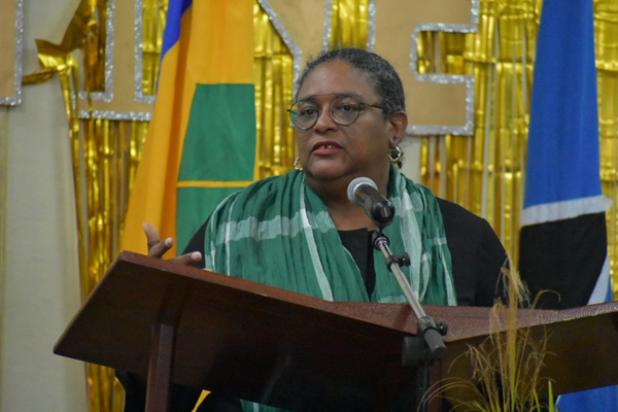 United we stand, divided we fall

The theme of unity was apparent as many gathered for the start of the launch of the Church of God of Prophecy 23rd Biennial Regional Convention of Barbados and the Windward Islands Thursday night.

The conference, which is being held from July 11th to 14th under the theme “United as One”, has the participation of members from Barbados, St. Lucia, St. Vincent and the Grenadines and Grenada.

Speaking during the opening ceremony, which took place at Solidarity House, Prime Minister of Barbados, Mia Amor Mottley spoke on the importance of unity, as many hands made light work, and the fact that principles and values mattered.

“In order to be able to say to the people of Barbados, that before we can get to the programmes and the promises, what matters first are the principles and the values, and I therefore speak to you tonight conscious that irrespective of whether we walk on the path of the state or walk in the pursuit of the Lord, principles and values matter,” she said.

“I don’t say so idly, because for too many, it is easy to abandon principle when it becomes inconvenient or difficult to adhere but principles only mean something when it is inconvenient to stand by.”

She concluded her remarks by stressing that unity was important, for while we can do things on our own, together, we will reap success.

During his remarks, Leader of the Opposition, Bishop Joseph Atherley, echoed the Prime Minister’s sentiments, and saluted all the church leaders that prayed for the leaders of the island, the cabinet members and Ministers, as he believed that the church had a responsibility to hold the Ministers spiritually responsible.

“We must hold the hands of the Government in socially uplift our people and bring the betterment to the country,” he said.