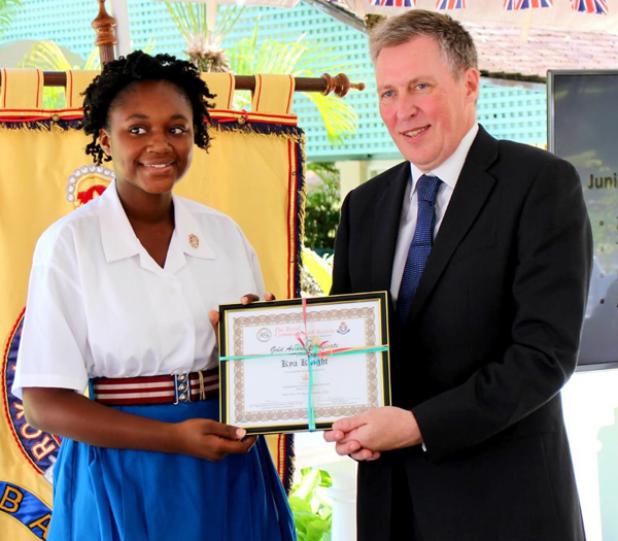 Kya Knight of the Deighton Griffith Secondary School was the winner of a Gold Award in the Senior Category of the 2019 Queen’s Commonwealth Essay Competition. Here, she accepts her certificate from His Excellency Craig Fulton, Acting British High Commissioner to Barbados.

THE United Kingdom’s representation in the Commonwealth countries of the Eastern Caribbean has expanded over the last year.

“We now have our new High Commission offices in Antigua, Grenada and St. Vincent, as well as one in The Bahamas. And that has all taken place since we hosted the Commonwealth Heads of Government Meeting in 2018, in London. So this gives a growing and very good footprint for us to work ever more closely with our Commonwealth nations here and we have a lot of issues to work on and issues in common, which particularly affect the small island states of the region. Chief amongst these is the issue of climate change,” Mr. Fulton remarked.

Noting that this year the UK will be hosting the 2020 United Nations Climate Change Conference in Glasgow, he noted that there will be greater collaboration with the nations of the Commonwealth to address some of the issues that affect them directly and Fulton stressed that it would be key if youthful voices can also be heard on these matters.

“As part of that, we are going to be working very closely with the nations of the Eastern Caribbean, to try and build on consensus and progress around the issues which are particularly important to the small island developing states, which we hold great importance to. So we are going to be working closely with the nations here, but what we expect to hear is the voices of the children. We have already seen it at the UN, with 16-year-old Greta Thunberg and obviously, it’s the children that are going to be most important as we go forward,” Fulton stated. (RSM)