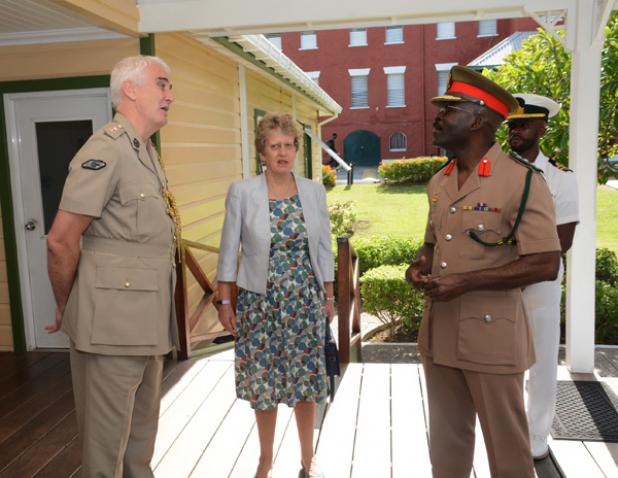 From left: Lt. Col. Anton Gash, the United Kingdom’s Defence Attaché for the Caribbean in conversation British High Commissioner to Barbados and the Eastern Caribbean, Janet Douglas, and Chief of Staff of the BDF, Col. Glyne Grannum yesterday morning.

The United Kingdom (UK) Government is in the process of setting up new diplomatic offices in several regional countries, a clear sign says the British High Commissioner to Barbados and the Eastern Caribbean, Janet Douglas, of the UK’s commitment to the Caribbean region.

Her comments came yesterday morning while she delivered feature remarks at the opening ceremony of a Strategic Leadership Programme hosted by the Barbados Defence Force in collaboration with the United Kingdom Ministry of Defence at St. Ann’s Fort, The Garrison. She indicated that to date, two new offices have been opened in this region, and two others are set to open in the not too distant future.

“We are delighted that we have just opened our new office in St. Vincent and the Grenadines and we will be opening in Grenada very shortly, the next couple of weeks; and then towards the end of the month, beginning of October, we will be opening in Antigua. This is a great sign of the renewed commitment that the UK has to the Caribbean, part of an opening of posts; and also opened only two weeks of ago is our new High Commission in The Bahamas, which sadly the new High Commissioner is having rather a baptism of fire at the moment, or should I say wind!” she added.

Meanwhile, speaking to the week-long course which opened yesterday, she said the British Government was pleased to offer the course to security partners in the Caribbean. The programme which is delivered by a civil-military team from the UK’s Defence Academy and Cranfield University’s Centre for Defence Management and Leadership, she said, is aimed at enhancing strategic leadership and management at the corporate/strategic level across defence and the wider security sector.

“The Strategic Leadership Programme which you will be participating in this week is delivered overseas to emerging and future strategic leaders in the defence and security sectors. It’s been running successfully since 2006 in developing and developed countries and now more than ever programmes such as this are vital, if we are to rise collectively to the security challenges of the 21st Century word,” she said.

High Commissioner Douglas made the point while noting that as the speed of communication and the pace of technological change increase, so does the complexity of managing the security of our nations. She insisted that this applies to all countries whether small or large.

“The burden of leadership is heavy and we need to work together that our leaders both current and future, are exposed to concepts of leadership in the widest varieties of forms and in the context of constantly evolving scenarios. The topics you will be examining this week are central to how you will react when called upon by your respective countries’ political leaders. The course will be touching on key issues such as ethics, change management, forms of leadership and communications. And underpinning everything that we as public servants do, whether in the civil service or security forces, is the issue of integrity; I am sure that the programme will provide plenty of food for thought both this week and beyond,” she added. (JRT)