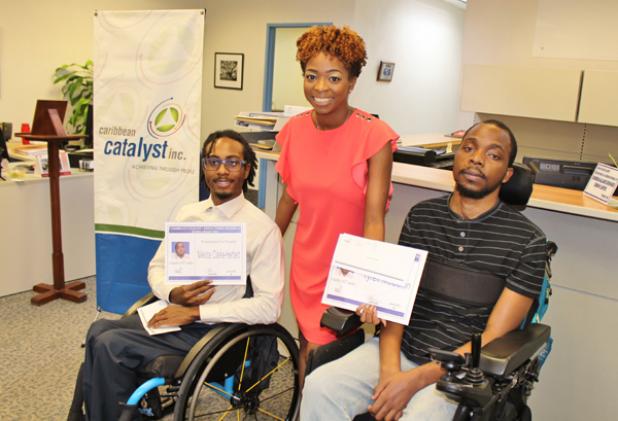 Tyrell McCollin (right), winner of the Caribbean Catalyst’s 15th Annual Kregg Nurse Memorial Scholarship Award, with first runner up Nikkolai Clarke-Herbert (left) and presenter of the award Dionna Browne-Findlay, who herself won the award back in 2010.

Caribbean Catalyst Inc. remains committed to celebrating the life of Kregg Nurse and his legacy, to inspire persons with disabilities to pursue their academic and career aspirations.

Angela Boyce, Office Assistant at Caribbean Catalyst pointed out the above, just before announcing the winner of the 2019 Kregg Nurse Memorial Scholarship Award, during a ceremony held at their office in River Road, St. Michael, on the anniversary of Kregg’s birthday on June 13.

The Caribbean Catalyst Annual Memorial Kregg Nurse Scholarship Award, which was conceptualised by Managing Director of Caribbean Catalyst Inc., Rosalind Jackson, is in its fifteenth year. This annual Award is given to an individual with a disability, who has successfully completed at least one year of post-secondary school education, in any field, and who is continuing his/her formal education, at a recognised tertiary educational institution.

“Kregg did not allow his disability [muscular dystrophy], to become an inability. He graduated from the University of the West Indies, Cave Hill Campus with a Bachelor of Science Degree in Accounts and subsequently became a Certified General Accountant” Boyce remarked, as she reflected on Kregg’s life.

Managing Director, Rosalind Jackson meanwhile pointed out the need for disabled persons to have greater opportunities to obtain meaningful employment, which is critical, if they are to be genuinely integrated into society.

It was later revealed that four applications for the Scholarship Award were received and after the interview process, two finalists were named, Nikkolai Clarke-Herbert and Tyrell McCollin.

Nikkolai was named as first runner up. He was diagnosed as a paraplegic, after being involved in a vehicular accident, which affected his lower spine. That accident occurred three days after his first birthday. The 24-year-old student of the UWI Cave Hill Campus has at present completed the first year of his Bachelor’s Science Degree in Computer Science. His career goal is to become a video game designer and eventually own a video game company.

Winner of Caribbean Catalyst’s Fifteenth Annual Kregg Nurse Memorial Scholarship Award, 21-year-old Tyrell McCollin, had earlier applied in 2017, but was unsuccessful. His determination however paid off this year, after he reapplied. On May 2014, Tyrell was involved in a serious accident, as a vehicle lost control and struck him, as he was on his way to class at the Samuel Jackman Prescod Polytechnic, where he was studying Building and Drafting. He was also enrolled at the Barbados Community College, completing his final year in an Associates’ Degree in Land Surveying. Following the accident, he was hospitalised for one year and was diagnosed as a quadriplegic.

He subsequently had to change career paths due to his limited mobility and decided to pursue a Bachelor of Science in Accounting at the UWI, Cave Hill Campus. Unfortunately, due to high transportation costs, he has now switched to an online degree in Banking and Finance, at the UWI Open Campus. His career goal is to use the knowledge acquired to gain employment within a financial environment or to pursue an entrepreneurial venture that will allow him to contribute to society and inspire others with disabilities.

He meanwhile intends to use the monetary donation to assist with his medical and everyday expenses, which continue to challenge him financially. (RSM)