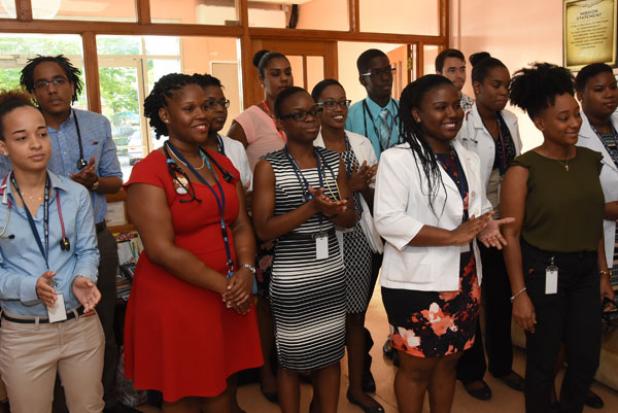 The new interns that joined the Queen Elizabeth Hospital yesterday.

The Queen Elizabeth Hospital (QEH) has welcomed a new batch of interns, commencing their one-year journey towards being able to practise medicine in this country.

The 27 medical school graduates, all Barbadians, were chosen from among 52 who applied for posts within the professional internship programme for newly graduated medical doctors.

The interns – 18 females and nine males – were all smiles as they reported to work at the Martindale’s Road medical facility. They were greeted by Director of Medical Services, Mr. Anthony Harris; and Dr. Clyde Cave, Senior Consultant, Department of Paediatrics.

According to Dr. Cave, those chosen for the programme attained the highest grade point averages (GPAs) of the programme’s Barbadian applicants.

“It is the policy of the Board of Management of the QEH to give Barbadians of the three campuses of the University of the West Indies first preference. So students are ranked based on academic performance – which is calculated in the form of GPA – and the top performers are accepted into the QEH’s internship programme,” he told The Barbados Advocate.

He added that the interns will do three month rotations in each of the major clinical department – medicine; obstetrics and gynaecology; paediatrics and surgery and together with the interns who came into the QEH during the January intake, will be evenly divided among the four specialties. He indicated that interns from the two periods number 36.

Also on hand was the 2015-2016 Intern of the Year, Dr. Emma Dash, who offered some tips to the new interns on how to do their best and give of their best to the patients with whom they will come into contact with. She told them that while it may seem as if they have overcome their biggest hurdle, the real work has only just begun.

“My first pointer is to be humble [and] ask as many questions as you can possibly think of. Yes I know you just completed your exams and you think you know a lot, but experience is gold and that’s what your seniors are there for,” she said.

Dr. Dash also advised the interns to see every job involved in the care of the patient as theirs.

“If you have to push their wheelchair down the hallway at two o’clock in the morning to get X-rays, do it; don’t say that is not my job because everything is your job. The purpose is to make the patient better. Secondly, work hard, work smart. You can either be the intern who gets here at 6:30, 7 in the morning, be organised, see all your patients, know everything for when your seniors get there; or you can be the one that gets there at 8:30, strolls in at 9 o’clock and then you’re scrambling for the rest of the day,” she said.

Last but not least, she reminded them to be kind to their patients and noting that most patients know what is wrong with them, she urged the interns to value their patients’ input.

“You are the main point between them and your seniors, so you represent them… everything that happened during the day that they tell you about, that is what you are supposed to relay to your seniors, that’s important. And I’ve always found that if you treat your patients like you would your family, like your brothers and sisters, it is a lot harder to go wrong,” she contended. (JRT)