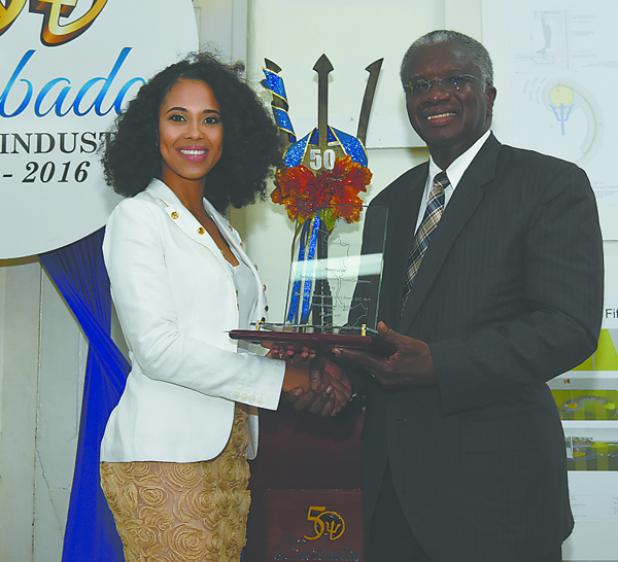 Taesha Carrington accepts the award for winning the Monument for 50 competition from Prime Minister Freundel Stuart during an awards ceremony at the Main Guard, Garrison yesterday.

Tribunal’s decision ‘worth the wait’

Tue, 07/19/2016 - 12:51am
By:
Jenique Belgrave
Government will pay!
Prime Minister Freundel Stuart made it abundantly clear that the former National Conservation Commission (NCC) workers awarded up to 52 weeks of wages in compensation for unfair dismissal by the Employment Rights Tribunal (ERT) would receive their funds.
“Government has to pay. You cannot have a decision against a government institution, in this case the NCC, and say you cannot afford to pay. You have to pay. Whatever the terms on which the payments are made, it is now a debt due and owing by the NCC when the figures have been finalized,” he insisted.
Regarding his expectations as to the timeframe for these payments, he said it all depended on how quickly negotiations between the representative unions and the NCC could be completed.
“I can only have an expectation when the unions have sat down with the NCC and the figures have been finalized,” he told the media yesterday at the Garrison Savannah’s Main Guard.
“The unions and the NCC now have to sit down, [and] get the arithmetic right. Once we know what the arithmetic is saying then that’s when time begins to run. That’s when you determine how much time should be lapsed before payment is made,” he continued.
Stuart highlighted the decision helped to establish the credibility of the tribunal, stating “it shows that we have a tribunal that if it wants to and on good evidence can decide against government institutions”.
“The tribunal needs that kind credibility if people are to take it seriously and if unions are going to feel comfortable appealing to it and so on,” Stuart emphasized.
He continued, “The tribunal has handed down a number of high quality decisions against private sector employers and now against a public sector employer in a high profile situation, so we know we have a tribunal that we can trust, a tribunal with which we can feel safe and I want to congratulate the panel that determined this case for the courage and the quality of the work which they have produced and I hope that the negotiations between the unions and the NCC will start with haste so that the affected workers can get their just entitlements and this chapter be brought to a close.”
The PM, who made the call in 2014 that the matter would go before the ERT, said was not done “by whim or out of caprice”.
“I am very pleased that the Employment Rights Tribunal has brought its decision and while I regret the amount of time it has taken, I think that given the quality of the decision, the wait was worth it,” he argued.