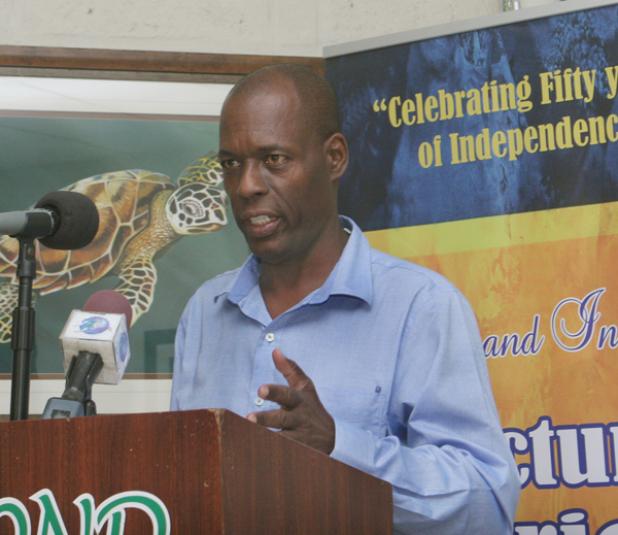 Historian and principal of Queen’s College, Dr. David Browne, speaking recently at the Pride and Industry series hosted by the ruling Democratic Labour Party at the Almond Bay Conference Centre.

time to make the switch

Fri, 07/29/2016 - 12:00am
Historian gives move to a republic thumbs up
A move to make Barbados a republic would be fully endorsed by noted historian Dr. David Browne.
However, according to him, it must be done with conviction and be non-partisan.
His comments came as he dissected the events leading up to the demise of the “Little Eight” and Barbados gaining its independence, during a lecture hosted by the Democratic Labour Party as part of its Pride and Industry series.
When asked if Barbados should become a republic he gave a resounding yes, explaining that republicanism, just like independence, is a part of the constitutional growth in the nation-building effort.
“When or how I don’t know, but for me the republican status we should go after it and determine what we want to be as a nation. It has been tied up in a lot of partisan foolish talk over the years. You either go after republican status...you have the conviction, or you don’t have it,” he said.
According to Dr. Browne, “Barbados’ move to independence was a wise decision in the midst of intrigue, indecision and a lack of vision and unity by many Caribbean leaders in the larger territories.”
The lecturer told the audience that now is the time for serious reflection, even though 50 years in the life of a nation state is but a short period of time.
“The questions posed by the Rt Hon Freundel Stuart are most pertinent. After 50 years of independence do we still have pride in our nation? Are we still industrious? Should we look again at our work ethic? What are we doing about our escalating crime and violence? Should this not be considered a non-partisan issue?
“After 50 years of independence, what are we going to do about restructuring our economy? The way forward in the 1960s was not as challenging as it appears now in the 21st century. We must enter on a new frontier of economic thinking in an uncertain and murky environment. What about the CSME and our role in a wider Caribbean? Are we as Barbadians ready for deeper integration with our neighbours? Are we ready for deeper constitutional status in the form of a republic?” he queried. (JH)