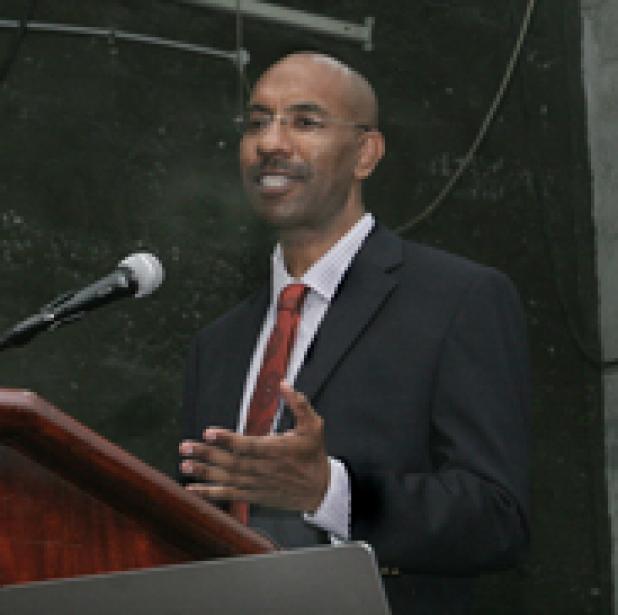 Grenville Phillips II outlining reasons for the need of a third party in Barbados.

Sat, 04/09/2016 - 12:00am
By:
Peta Rowe-Forde
Barbados has a debt bill of 12 billion, has 1.6 billion in projected deficit and its national debt is greater than 130 per cent of GDP. While the former is not justification for a third party, Grenville Phillips II believes that the status of the national debt is sufficient justification for the establishment of a third party.
Phillips II explained that many countries have debt and they also incur deficits that may be spent on tragedies or investments. However, many of the investments that money has been put into have failed, and thus, contributed to the national debt of the country. Phillips II has a major problem with this. In his opinion, with regards to this, both existing parties have failed as they spent 50 years accumulating the debt known today.
Phillips II went on to say that the Government rarely tells the public of the true state of a poorly performing economy. In using the example of Guyana, Phillips quoted former Prime Minister of Guyana, Hoyte, as saying “We have concluded that the standard IMF prescription is not only palpably irrelevant and useless, but also positively dangerous and counter-productive in our particular situation.
“We must resist, with all our might, the pressures that might be exerted to force us on to the IMF’s Procrustean bed.” Just three years after these comments were made, the Guyanese people were surrendered to an IMF programme.
The recent downgrade by Moody places Barbados at a further disadvantage. Phillips II believes that we are on the edge of the cliff waiting to fall off or better yet, Barbados’ Titanic is heading for the iceberg.
The Prime Minister’s response to the 2014 downgrade that preceded this last one, is similarly regarded like Hoyte’s back in 1985. Phillips II quoted the Prime Minister as saying, “What they say is only relevant if we want to embark on an orgy of foreign borrowing in which people should know how much we should have to borrow, how much our money should cost.
However, if we are not intending in the short or medium term to go to the capital markets to borrow money, what they say has as much value as what you would see in any garbage dump collected by the Sanitation Services Authority.” In light of all this,
Phillips II is stating that there is a critical need for a third party. Moreover, he stated that a group of capable individuals were needed to manage the affairs of the country especially since there is no time to play with it. So far, the third party has rallied 12 possible candidates and is currently searching for more.
Lower Taxes
The establishment of a third party is not the only thing that Phillips II is calling for. He declares that the lowering of taxes can by far increase the productivity of the country.
Referring to a study that was done on the island, Phillips II revealed findings, which indicated that the more civilians are taxed, the less productive they are; as their mindset is that most of their money goes to paying taxes and working hard makes little to no sense. Moreover, the less taxes there are, the more people are able to spend; both of which injects money into the economy.