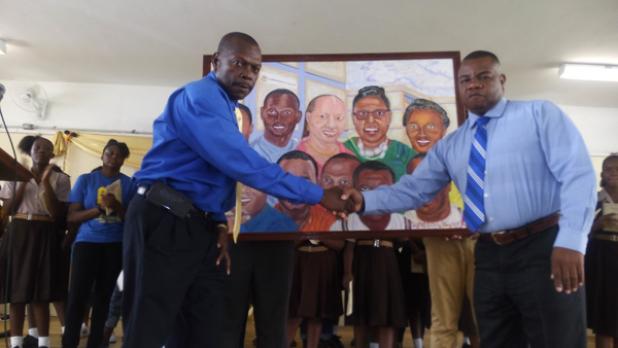 Major Errol Brathwaite, Principal of Ellerslie Secondary School accepting the painting on behalf of the School from painter, Wayne Collymore- Taylor. The art piece was presented in recognition of the school’s 50th anniversary.

Sat, 10/29/2016 - 12:00am
Ten of Ellerslie Secondary School’s illustrious alumni have been honoured through a painting created by Wayne Collymore- Taylor.
The past student presented this art piece to the School yesterday during the morning’s assembly. This presentation was done in recognition and in celebration of the School’s 50th anniversary of existence.
Speaking to the press, teacher and Chairperson of the School’s 50th Anniversary Committee, Andrea King- Patrick commended Collymore-Taylor for his “excellent gesture”.
“We will use it… as an inspiration for the students to strive for high goals whether it be in sports or academia.”
The images depicted on the painting are those of past students – cricketers, Sulieman Benn, Carlisle Best, Sherwin Campbell, Pro Vice-Chancellor and Principal of the University of the West Indies, Cave Hill Campus, Professor V. Eudine Barriteau; radio moderator and veteran journalist, David Ellis; three-time CARIFTA Games gold medalist in the 800 metres, Anthonio Mascoll; 1988 olympian, Yolande Straughn; former national netballer, Annette Hall; former national footballer, Ricardo Goddard; and hockey player, Colin “MacBeth”  Elcock.
Painter, Wayne Collymore-Taylor told The Barbados Advocate that he was motivated to create the piece during the recent passing of Tropical Storm Matthew and he drew his inspiration from Psalms 46 and the song, “Stand Still”.
He further stated that he donated the painting to the School in honour of the memory of his brother, the late Dr. Charles Taylor who was a senior medical lecturer at the University of the West Indies, Cave Hill Campus.
“I donated this painting on the behalf of him because I want to emulate him. He was a person who was very giving. He would give his last cent and I wanted to honour him.”
Year-long activities in celebration of Ellerslie’s 50th anniversary commenced on September 26 with a Founder’s Day service. Upcoming, students of the School will be involved in tours and there will be the event, Christmas in the Courtyard.
“We are very proud to be celebrating with the country,” stated King-Patrick. (MG)