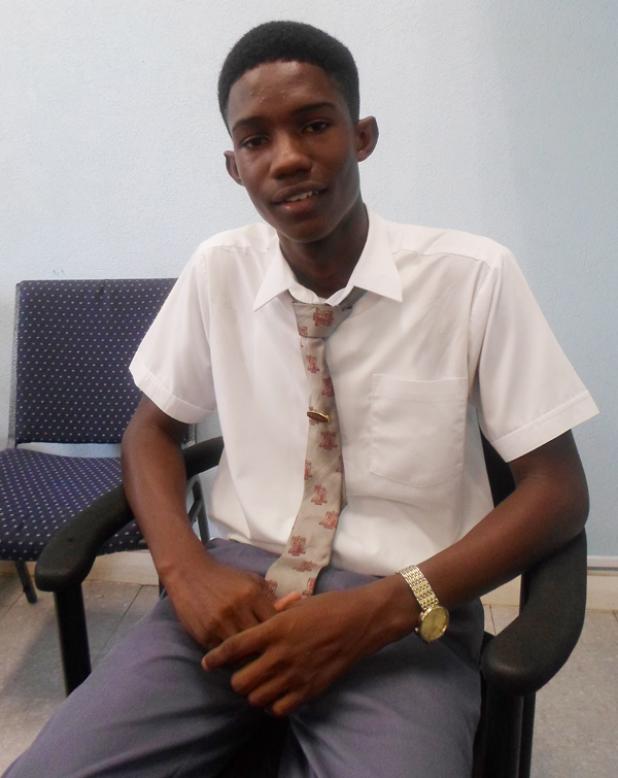 Thu, 11/10/2016 - 12:00am
By:
Krystal Penny Bowen
HE is just one of the emerging stars to be born at the St. Leonard’s Boys’ Secondary School and his name is Tarique Griffith and is known by his peers as “Luther Vandross” of his school.
Although soft spoken, 16-year-old Tarique can captivate any audience and he has been doing so from Class Two in primary school, where he was the only boy in his choir. Just recently, he competed in the Richard Stoute Competition placing fifth, while last year he placed third. This year, he did an original song which he wrote called “Don’t Go”.
Tarique is not discouraged by the results as he felt that he did a good job and he is looking forward to developing his craft. Later this month, he will be kept busy as he is expected to perform at the Spirit of the Nation show. Recently, he entered NIFCA for the first time and he won two bronze awards for his original song and a Luther Vandross song. As to his musical interests, Tarique is a fan of ballads, rhythm and blues and gospel, and his favourite artistes include Luther Vandross, John Legend, Bruno Mars and Richard Marx.
Tarique explained that there is no one in his immediate family who is musically gifted and he said that his talent is “a blessing”. He is currently an active member of his church and he is also a part of the St. Leonard’s Boys’ school choir.
He has credited his teacher, Andrew Lokey, who has taught him voice training and he is presently training with Jazz artiste, Marisa Lindsay. In addition, he has received support from family and friends and
he has dreams of going overseas to perform on one of the talent shows.
“I actually want to do either America’s Got Talent or X Factor next year, once I get the money to go away. I want to try that,” said Tarique.