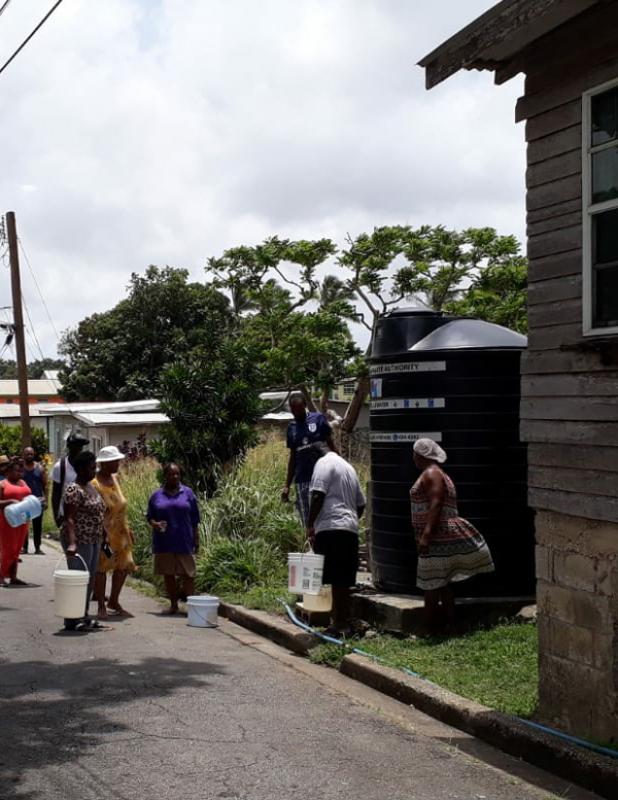 The residents of Sherbourne St. John and other areas of the parish, amidst COVID-19 concerns, are still pleading with the government and the Barbados Water Authority (BWA) to answer their cries for water.

Yesterday the community tanks of Sherbourne ran dry and the water tankers dispatched by the BWA did not arrive until after noon. The residents spoke openly to the media, expressing the need for a sustained supply of pipe-borne water. The gathered members of the community also said they felt disrespected that the pipes were still dry, especially after hearing the announcement by Wilfred Abrahams, Minister of Energy and Water Resources, that with the concern of COVID-19, some persons who had not paid their water bills would have their service restored.

Democratic Labour Party 3rd Vice President Andre Worrell highlighted that other neighbourhoods in St. John had water and something has to be done to help those without water. Worrell stated that there were some residents who were having problems coming out every day to lift the heavy buckets back into their homes. He also mentioned that in some cases, washing machines took up to six buckets to fill for the washing of clothing. The issue is that the problem was glaringly serious before COVID-19 and now has gotten worse since the lockdown of the island with all members of households at home.

Worrell stated that the Barbados Water Authority had been sending out tankers and the residents were indeed thankful, but more needed to be done. The community has not seen a drop of pipe-borne water for exactly two weeks, and for the month of March, has had less than 48 hours of water from the pipes.

“I would also have to question how the BWA is being managed. An essential service such as the BWA received a petition signed by more than 100 residents in two communities and they did not have the courtesy of responding officially or reaching out to the same residents. This shows a lack of caring and consideration for these residents,” stated the DLP VP.

Speaking directly to the BWA the DLP member contended that the company should do a better job and show more proactive management and a caring focus about the health and wellbeing of citizens, not just focus on the dollar and cents.

Addressing the issue in a press release issued yesterday, Marketing Officer at the BWA, Yvette Harris-Griffith stated, “Today Sunday, April 5th, the Barbados Water Authority (BWA) was inundated with requests to provide water via tanker to many areas as most of the parish of St. Joseph and some districts in St. Thomas and St. Andrew were impacted by water outages as well.

“The BWA apologises for the late delivery of water to the Sherbourne, St. John area today Sunday. Residents were assisted with water via tanker by just after midday. The community tanks within the area were also refilled.”

She however pointed out that “The BWA has received several reports from residents in Colleton and Sherbourne, St. John as well as Branchbury in St. Joseph that their neighbours have been utilizing the water in the community tanks for bathing and washing clothes and cars at the tank.

“The Authority wishes to reiterate that this is not what the tanks have been provided for. These activities make it difficult for the other residents in the area
who need potable water to get it. We appeal to these persons to desist this unsanitary and unwelcome practice immediately and allow their neighbours to
have access to the water.

“The BWA generally refills these tanks (especially the tannk at Sherbourne #1) several times a day, which without these practices should prove sufficient.