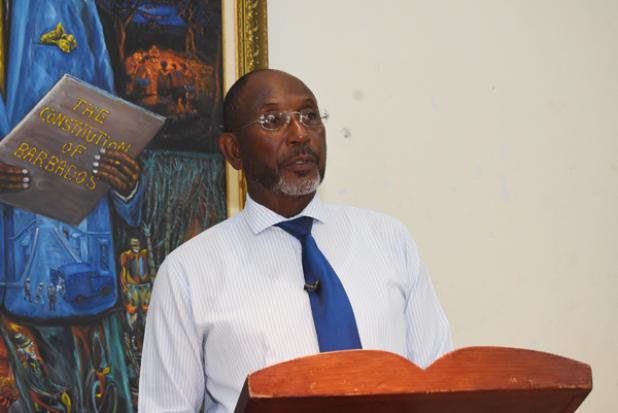 Sun, 09/11/2016 - 12:00am
IT is being suggested that the global economic framework is flawed and is rigged against small island developing states (SIDS) like Barbados.
That’s the view of Dr. Leroy McClean, an ex-diplomat and former head of the Barbados Investment and Development Corporation, who argued that even if a country wanted to, it is impossible to pursue an economic path that is significantly different from what obtains in the global economic framework. This, he charged, has been putting SIDS at a great disadvantage.
Delivering the Democratic Labour Party’s weekly lunchtime lecture on Friday afternoon on the topic, ‘Trying to Succeed in a Failed System’, Dr. McClean noted that the 2007/2008 economic crisis has negatively impacted countries like Barbados. A situation, he suggested, that was made worse by rating agencies which have been downgrading economies in a very aggressive manner. The same rating agencies, he noted, that on the eve of the financial collapse, were giving major financial institutions in many developed countries high ratings. He said that in the case of Barbados, these downgrades have occurred in spite of the fact that Barbados has never defaulted on any loan payment – foreign or domestic, and has also scrupulously met all of its domestic and international debt obligations.
“These poor ratings of government bonds have resulted in the inability of countries like Barbados to access financing at reasonable interest rates. The main factors that impact the ratings are government deficit to GDP ratio and the public debt to GDP ratio. Pressure is therefore placed on Government to balance its budget by either increasing revenue or reducing expenditure, or both; and to reduce or refrain from borrowing funds. In addition, the OECD and the European Economic Commission have been placing pressure on these countries by placing them on blacklists as tax havens,” he said.
McClean added, “Our attempt to succeed in a system that has failed is retarding the economic development of small island developing states like Barbados.”
He went on to argue that while SIDS are being held hostage to policies of no or low fiscal deficits, small governments and dictated tax policies, the developed countries have been pursuing different policies. He made the point while noting that both the United States and the United Kingdom have adopted Keynesian Economic Policies to gain recovery since the economic crisis.
“The Keynesian economists advocate deficit spending by Government on infrastructural projects that are labour intensive to stimulate employment. This increase in employment would have a multiplier effect that would result in demand led growth with the likelihood of increased inflation and overheating of the economy. However, in the event that there is increased inflation or any overheating of the economy, Government could use increased taxation as a counter reciprocal measure to cool the economy,” he said.
Dr. McClean added that through a monetary policy of reduced interest rates, excess liquidity in the banks can be utilised to increase investment activity, and that increased investment activity and the resulting profits would mean that there is more taxable income. He admitted that there is a downside to this increased economic activity – more demand for foreign exchange – which can put pressure on the foreign reserves and the value of the country’s currency.
He made the comments as maintained that there is nothing wrong with deficit financing if the deficit financing is for productive activities. But he said international agencies have “pushed the idea down our throats that we must have a balanced budget”, and it does not matter if there are consequences to the people.
“The United Kingdom about three years ago ran a deficit of close to 12 per cent to bring them out of a recession. So there is a set of rules set up for the game, but the referee turns a blind eye when some people violate the rules and they only punish the people of small developing countries when the governments break these rules that are set by these international agencies,” he lamented.
McClean said individually countries may not be able to buck the trend, but SIDS can find a way to come together and make a difference. (JRT)