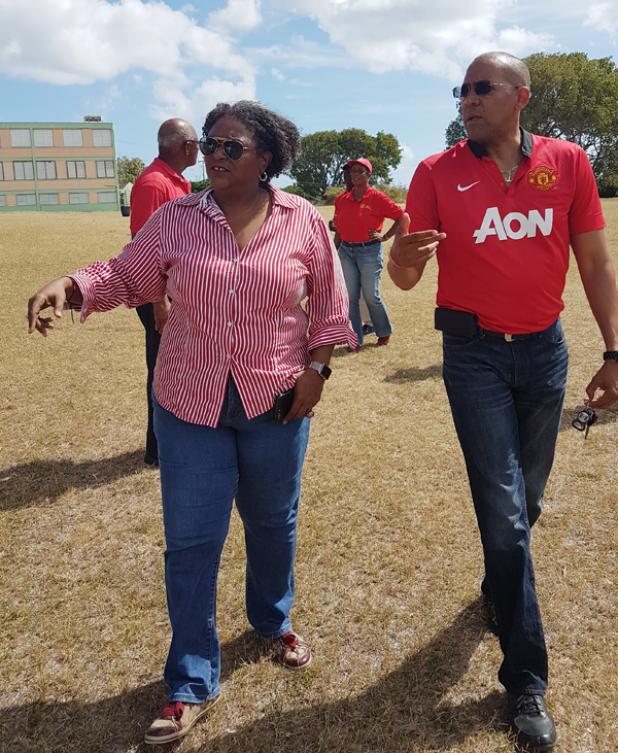 Member of Parliament for St. James Central, Kerrie Symmonds (right), showing the leader of the Barbados Labour Party, Mia Mottley, the playing field at Fitts Village where plans to build sporting facilities have been abandoned.

THE Member of Parliament (MP) for St. James Central, Kerrie Symmonds, is promising to fight, and if need be die for urban renewal in his constituency.

Yesterday, following a tour of his constituency with members of the Barbados Labour Party (BLP), including the party’s leader Mia Mottley, Symmonds told the media that at the time when his party left government, they were in the process of unlocking landlocked properties in the constituency. However, Symmonds said that project had since been abandoned by the ruling Democratic Labour Party (DLP).

“People who were living on this coast were in a position where they could not get access to their houses unless they begged for an ease from the next door neighbour. If you and the next door neighbour fall out for any reason, it means that you all of a sudden find it impossible late at night or early in the day to get in and out of your houses.

“It also means that emergency vehicles like fire trucks don’t have access to the houses. It means that old people who are unable to walk, can’t get in and out. That kind of thing in 2017, in my view, is absolutely unacceptable and completely reprehensible,” he said.

The Member of Parliament said he was also aggrieved with the fact that there are still many residents in his constituency using pit toilets; and complained that plans to build sporting facilities on the playing field at Fitts Village had also been abandoned.

“We have got to make wrong things right,” he declared.

“We just did an extensive cricket competition in this constituency, involving almost every district, and for the games here we had to rent lights. It makes life difficult and unnecessary costly, if Government does not do that which Government should be able to do to help facilitate sporting infrastructure,” Symmonds said.

Additionally, the MP cried out that roads in Fitts Village were in dire need of repair. On that note, he commended the private sector for making the effort to raise money through charities to repave Highway 1.

“I understand their pain, I really do. I think it is a disgrace however, that people in the private sector of Barbados must use charitable funds that can be used to help children in nursery schools, the elderly, or people that need assistance in the hospital... We must now take that money to do what Government is taxing us in order to do, and that is to maintain a major artery like Highway 1,” he said. (AH)